Where did Wikipedia Pro app disappear to?

There was this Wikipedia Pro app (paid app; official app by Wikimedia Foundation) coexisitng with the free Wikipedia since long ago app that I purchased. Suddenly, it just seems to vanish from the surface of the earth. Googling hasn't helped me yet.

Anyone with any ideas?

A few bucks is not a big deal but I don't feel like getting fooled.

The sneaky part about his act is that the Wiki Encyclopedia Pro app disappeared from Google search results as well. I understand if some nobody contributes a free app and decide to pull out for whatever reason but big names doing things in secrecy behind their paying customers' back is different.

I've doubled-checked and the app was not made by Wikimedia Foundation so apologies. It appears Excelentia did it and their account got shut down by Google. So apparently 9 million users don't matter to Google.

If an app you've been using isn't offered on the Play Store for some reason (other than being removed for legal reasons, or if it's malware), you can usually still find and install it from your install history.

From the web version of the Play Store, click on Apps, then click on My Apps on the left which should take you to https://play.google.com/apps which should show a list of all of the apps you've ever installed, including ones which have been discontinued, and you can click through to install them:

Alternatively you can do the same thing on your phone, open the Play Store app, go to My Apps, and then change from the "Installed" tab to the "All" tab and scroll down until you find your app (I think they're listed in the order that you first installed them): 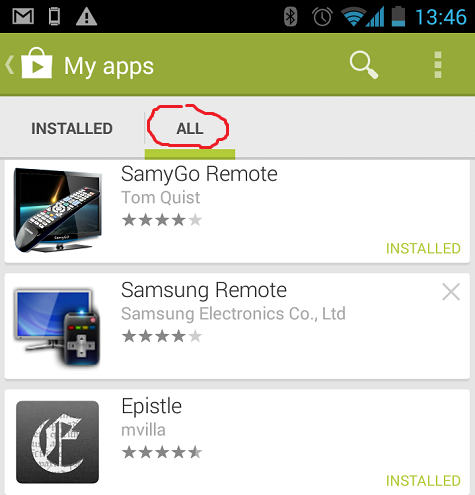 (I'd advise using the web page, as you can normally find what you're after quicker than when doing a lot of scrolling down in the app)

Not the answer you're looking for? Browse other questions tagged paid-apps or ask your own question.

6
How do I share an app across two phones?
56
How to buy an app for a friend?
33
Can I re-install a purchased app from Google's Play Store?
5
Restoring purchases made with In App Billing
19
How many devices does one purchase of Android app support?
0
I can't share a paid app with a family member
1
Payment deducted but app was not downloaded
2
How many times can an app purchase be refunded on Play Store?