According to a colleague who has the new Nexus 7 (2013) model already, there is a GLONASS sensor in addition to the GPS one in the device. Is this true? I was unable to find any reference to this alleged fact in the official documentation and via a casual web search.

Please state your sources in your answer(s).

According to Ifixit's teardown, the Nexus 7 2013 uses the Qualcomm 8064 Snapdragon S4 Pro SoC. Qualcomm's specs show that SoC uses their IZat Gen8A GNSS chipset, which according to their overview does include GLONASS support, though this doesn't necessarily mean GLONASS support is actually active and available in software.

A simple means to test whether you've got GLONASS is to use GPS Status and Toolbox and see how many satellites it shows for you. If it shows more than 13 satellites, you're getting both GPS and GLONASS.

The definite answer is yes. I received my Nexus 7 (2013) a few weeks ago and today went outside to catch a few satellites. I'm using GPS Status & Toolbox whose user guide states:

Here's the left side of the screen shot I took: 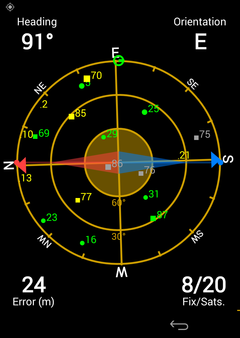 The Nexus 7 model would be the European one, if there are any differences.

Not the answer you're looking for? Browse other questions tagged nexus-7 gps glonass or ask your own question.