I'm trying to troubleshoot a problem with an unwanted pop-up message, and the person who's trying to help asked what kind of pop-up it is. It's just a message on the screen, what difference does it make? And how do I tell what kind it is?

Android has different ways for apps to give you information or get your attention, and they all have different names. App developers need to know the differences, and when to use each one, so they can code the correct behaviour in their apps. Even as an end user, if you want to troubleshoot a problem, find which app is giving you messages, or describe some behaviour (for example, when reporting a bug to a developer), it saves you time and confusion if you can call each thing by its correct name.

Notifications are the most common feedback mechanism on Android. They look like icons in the top-left of the screen (the notification bar). On Honeycomb and ICS tablets, they instead show up in the system bar, in the bottom-right next to the clock. 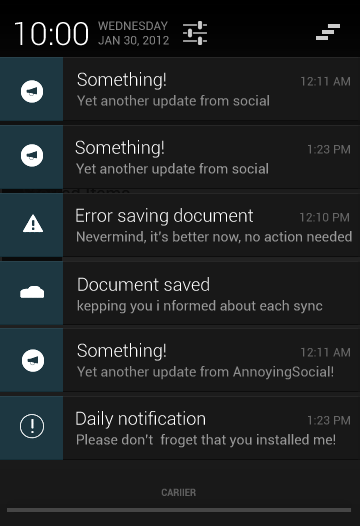 In Jellybean and above, once you've expanded the notification drawer (like in the screenshot), you can long-tap a notification to get a menu with one item, App info. Clicking this item tells you which app is responsible for the notification. You can also stop this app showing any further notifications from that screen.

Some apps create notifications to advertise things at you. This is now (since September 2013) banned under Google Play's rules, so you should report as malicious any apps that do this, from the app's page in the Play Store app.

Often your phone will play a sound or will vibrate with a notification, but not always: it's up to the app which created it. 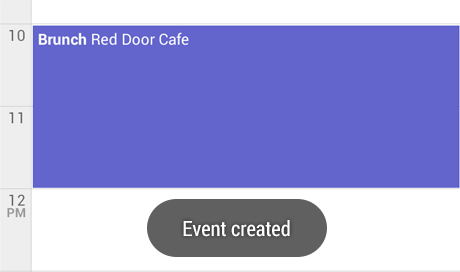 A toast is a small message that shows up in its own box near the bottom of the screen, and disappears on its own after a few seconds. It's usually a response to an action you've just performed, but in fact a toast can come from any app, not just the one in the foreground. A toast can't interact with you (you can't click on it or type into it), so there's no need to worry about it "stealing focus" like on a PC. There's no indication of which app created the toast. 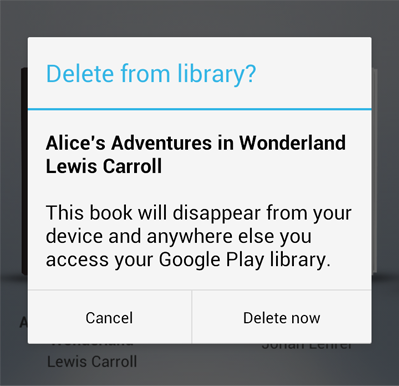 A window that appears, with buttons you can click or a list of options to choose from, is called a dialog box, or dialog for short. (It's spelt the American way even in British English.) They almost always relate to the foreground app. Strictly speaking, from a developer's point of view a "dialog" is any non-fullscreen activity window, but they're usually used for simple confirmations or choices, like in the screenshot.

In the marketing world, an interstitial is a page or screen that comes in between two others. They're commonly used to show large-format ads in ad-supported apps and games: you click a button in the app, and an interstitial shows for a few seconds before you get to the next screen.

Next time you want to discuss or troubleshoot some kind of message that pops up on the screen, you'll know what to call it, and you can make it easier for others to help you.

Not the answer you're looking for? Browse other questions tagged notifications user-interface popup toast-notifications .

9
Do I have a virus on my phone? A message from an Android app says so
2
Can Android keyboards capture my passwords and send it across Internet?
0
How's the thing in the image called?
2
How to disable toasts (popups)?
2
How to completely block popups / dialogs from WhatsApp without deleting the app?
0
Is there a glossary of Android's UI elements
0
WhatsApp Settings in Samsung S3 - Where do I find it?
0
Android 11: how to disable persistent notification
0
Whatsapp update not getting deleted
0
Catching a hidden application
See more linked questions