Summary: Is there a way to stop the Samsung Galaxy S4 screen from turning on when receiving text messages (without disabling the notification light)?

I've got a Samsung Galaxy S4 on Verizon. I've noticed that sometimes when it's in my pocket that it will turn on and access apps, etc. (for example one time I saw it had posted something to Facebook).

So really what I want to do is prevent the phone from turning on in my pocket, but I don't think that is an actual option. But I thought there should be a way to stop incoming text messages from turning on the screen, while still allowing the notification light to flash. But I haven't found an option that does that.

It looks like having the screen turn on when SMS messages arrive is a stock feature of the Samsung Galaxy S4 on Verzion (possibly applies to other models and carriers as well). I saw threads here and here discussing the problem. There is no setting to disable only the screen turning on.

The workaround that I ended up using is as follows: 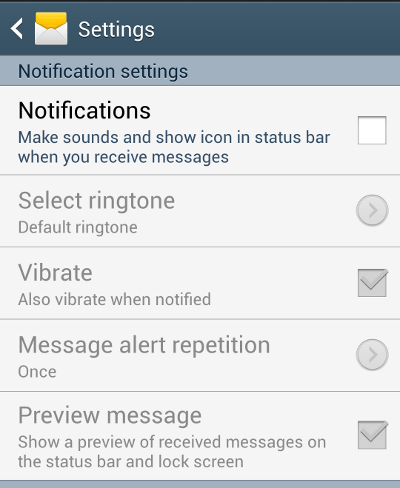 3) Enable SMS Popup. Then go to Addition Settings and disable "Screen on for Popup". 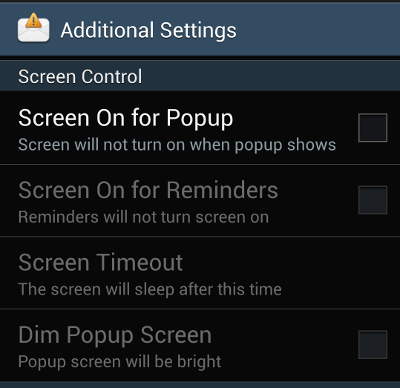 Maybe someday Samsung/Verizon will fix the problem, but for now this workaround seems to work for me.

In the galaxy S4 SMS application, go to Settings and there is an option called "Screen On". Untick this option and you should be able to do what you want.

Not the answer you're looking for? Browse other questions tagged samsung-galaxy-s samsung-touchwiz .

5
Prevent Samsung S4 Screen From Turning on Every SMS

2
Samsung Galaxy S : Why can't I set cursor position in text boxes in browser?
10
How can I fix the Wi-Fi button or prevent Wi-Fi errors when turning it off and back on?
0
Screen orientation on Samsung Galaxy 9000
9
I can't send a picture attachment together with a text message any more ( Samsung Galaxy S). Any idea why?
3
How to install Hebrew on a Samsung galaxy s vibrant
3
How do I determine which calendar entry is breaking my Android calendar sync?
6
Samsung Galaxy S: phone won't send or receive calls and text messages
3
Samsung S5 screen turning on and off when plugged in to charge
1
Can Always-On Display on my Galaxy A5 (2017) cause screen burn-in?
1
How to set custom text notification sounds with a Samsung Galaxy S22?