I have a Samsung Galaxy Discover that worked fairly well until the last week or so. I ran the device down down to 0% - at which point the device shut off. I performed a full recharge and then occasionally recharged it for brief amounts of time (usually getting to 30-40%).

My battery graph ended up looking something like this: 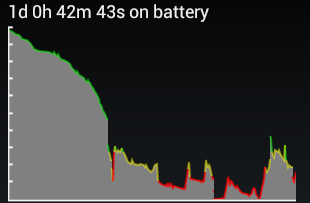 Then earlier today, I performed a full charge to 100%. The device shut off after a few moments and insisted that the battery was at 0%. I plugged it in and the meter now stays at 0%.

I'm not sure if this is relevant, but I discovered that the voltage is being reported as 4195 mV (the so-called 0%). However, a few days earlier, I remember that the phone seemed to think that about 3800 mV was 0%.

Is there a way to "reset" the battery meter? In other words, I need to tell the phone that it actually has a full charge even though it seems to think otherwise.

Update: the battery was eventually replaced with a brand new one and the issue continues to persist - even with the new battery. Interestingly, the battery seems to charge and operate correctly when the battery temperature is above 30° C.

I don't know if you're rooted or if you have custom recovery or not, but in some of the later versions of ClockworkMod recovery there is an option to "delete battery stats". Without root, there seems to be no way to reset the battery statistics.

I had the same issue with my phone, it is nothing to do with OS. It is an issue with the battery, I strongly recommend to buy a new battery and replace the old one. Hope this works for you.

Ok guys, lets share what we have down yet,

I guess 1 and 5 have more or less solved the problem for me.

finally I found the solution:
For me the problem was nothing to do with the battery. It seems a problem in the kernel of OS cases all the problems. As far as I discovered, if cpu is under heavy load then the kernel might crash and lost the control over hardware especially the screen and battery.

I also have found the permanent solution I downloaded a CPU control app (you need a rooted device) and set the cpu clock to a lower frequency and set the governor to Ondemand (that I found the most reliable one). Then you need to wipe battery stats and cache(it is up to you) and enjoy your smartphone.

No My mobile phone works fine, no lag, no battery drop.

Not the answer you're looking for? Browse other questions tagged battery charging .

6
my battery charge indicator is continually flashing on and off
1
Battery getting charged with ultra speed and continuous at 1%charge for more than 9 hrs
1
Full battery completely depleted within a few hours without any user activity -- what to do?
3
Device Steadily Discharging While Plugged Into AC?
0
MOTO E battery drops suddenly to 0%
3
Tablet shuts down due to low battery when battery meter is above 10%
2
Battery capacity wear-down, and its relationship to charging practices
3
Battery drains when phone is turned off
1
How does Battery Management System work (at the hardware-interface level) ? And how is idle self-discharging of batteries handled?