Icon is stuck behind google search, and appears on all screens (screenshot included)

I was re-arranging my icons when I accidentally dropped an icon "behind" the google search bar up top.

The icon appears on every screen when I swipe left or right, but disappears when I view all apps.

How do I remove this icon? (see the mis aligned YouTube icon at the top) 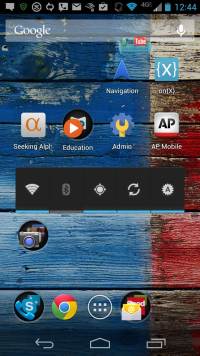 Note that my other answer is more of a workaround (but also something recommended by many even without problems) that is almost guranteed to fix the problem. This is a direct fix which will most likely work, but I can't say that with absolute certainty as I can't recreate the situation myself.

After some googling, I've noticed that your icon (as you point out already) is off-center and missing its text label. Rather than the icon itself being stuck, it looks like what you're seeing is a stuck graphical artifact. This has happened to a few other users on other forums, and rebooting the device seems to be a fix for them.

Whether this works for you or not, I'm posting it as an answer for the sake of future internet travelers who stumble upon this question.

Please note that this answer is more of a workaround than a direct solution. See my other answer for a suggested direct solution (It basically says "Try rebooting", though).

Since you're on the stock launcher (Which, if I recall correctly, doesn't allow you to remove that search bar), the best answer I can think of is to try installing an alternative launcher. I personally use Nova Launcher (The $4 "Prime" version actually).

After installing the new launcher, most (Nova included) will give you an option to import your old icon layout if you want to. But by default, you're basically given a clean slate.

I usually recommend Nova because it nearly mimics the default launcher (no crazy features or surprises) and adds a few nice features - my favorite is that it has an "Uninstall" drag-area that lets you uninstall an app without going to its settings/info page.

Other alternatives that I've played with include...

Not the answer you're looking for? Browse other questions tagged home-screen-shortcuts home-screen bugs user-interface or ask your own question.