Can I damage screen (Nexus 7) by having it turned on and not change for longer periods of time?

I wanted to use an app called TimeWise to have a timer ticking and showing how much time is left in a time-boxed task. However, I am not sure, if having the screen turned on like this (even with very low brightness) for 25 minutes without changing its content other than the counter, cannot damage it. These 25 minutes can be repeated for 4-8 hours. It is likely, that I will change the content of the screen from time to time, so this might be helpful, but I am not sure. Does anyone know if my concern is pertinent, or it is no problem for this type of screen? The device I'm using is Nexus 7 2013 version. Thanks!

No. Both versions of the Nexus 7 use IPS LCD displays, which are not vulnerable to burn-in or other detrimental effects from displaying a fixed graphic.

Burn-in in currently used display technologies is a problem limited to organic light emitting diode (OLED) displays, such as those used on the Samsung Galaxy S3 and S4. The Electroluminescent compounds used to make these displays degrade as they are used (resulting in reduced brightness over time), thus displaying a fixed graphic will result in some parts of the screen wearing at a different rate than other parts. Compounding this issue is that different colours of OLED degrade at different rates (blue degrades fastest, followed by green, then red). Here's an example of what this looks like. The burned-in sections will be permanently darker than the rest of the screen. 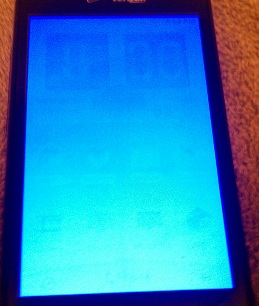 Not the answer you're looking for? Browse other questions tagged nexus-7 screen physical-damage or ask your own question.

30
Why can the Nexus 7 display so much more content on-screen than the Galaxy Nexus?
5
What is the length and breadth of ONLY the screen in the Nexus 7?
12
Nexus 7 wont boot after complete discharge
2
Screen uses 99% of battery
3
Is it possible to extract Nexus 7 serial number through command line (e.g., ADB)?
1
Change the screen size and dpi
2
Can screen dimming apps damage the screen?
2
Battery drains every time screen is turned on
2
Forcing system upgrade despite “Battery too low”