how do I make the radio start automatically when I plug in my headset?

On my old phone, the radio would automatically turn on when I plugged in my headset. I can't seem to get it to do the same on my new phone?

I have a Sony Xperia go, running jelly bean.

Plug in launcher is a free app that lets you launch any app once you plug-in your headset.

As I've already pointed out in a comment on the question, there are plenty of headset control answers (see e.g. this one). Those app give you some added control using your headset, so they allow to define what app shall be started when the headset is plugged in, and using the single headset button they let you perform a multitude of actions like volume control, start/stop, skip, pick up/reject call, and more.

A different approach could make use of our "ultimate automation tool" Tasker, which also can supervise the headset plug. This would give you even greater control over the conditions. So you could e.g. have a different app started at home than at work. Here you could use State → Headset plugged as condition (and optionally, ad described, location, time, whether power is connected, the device docked...), and then Load App as action. You could even have set the volumes to your likeness before, and let Tasker send an SMS to everybody to not to disturb you while enjoying your music ;) 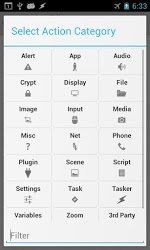 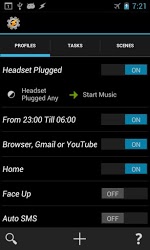 Funny thing is: as the second picture shows, your case is even used for the example pictures on Google Play (Headset Plugged → Start Music)...

Not the answer you're looking for? Browse other questions tagged headphones fm-radio sony-xperia or ask your own question.

8
How do I choose a wired headset whose buttons work?
6
Choose default music player to play / pause music on hands-free button press