Page up and page down in web pages and elsewhere

I can't figure out a usable way of scrolling page by page. I'm using Android 4.1 (stock Android from Google). I have root access if needed. I want this especially in the default browser, but a solution that works in all applications would be better.

I've found three ways to scroll down by one page.

Given how common the “page down” task is, there must be a better way that I'm missing. What is it?

You can use LMT Launcher's PIE navigation feature to achieve your objective. LMT wouldn't replace your current home launcher which means you can rest assured that your home screen would stay untouched.

Let's come to business. Here is the XDA thread about LMT Launcher. It's a freeware app and needs to be sideloaded into the system (not available on Play Store). Make sure that Unknown Sources is enabled before you try installing its APK.

It can be activated along the edges of the screen (I prefer at bottom) like this: 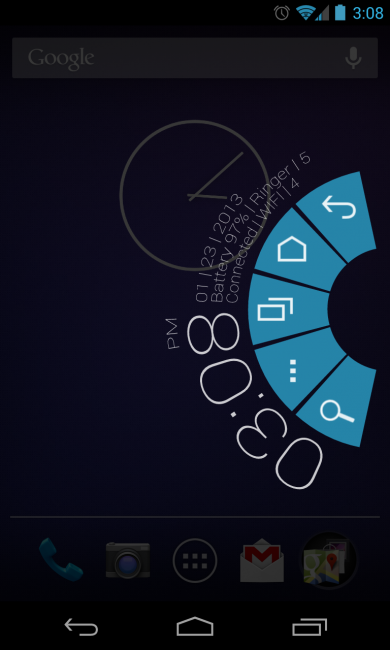 This navigation is called PIE and each of the blue section is referred as a pie.

How does it help?

You can configure a pie to execute a script. The script would be nothing more than:

where the X1, Y1 and X2, Y2 coordinates can be obtained from my answer here (see step 1 or step 2 under Instructions for Tasker and Xposed Additions there).

You can also configure a pie to execute a KeyEvent. The keycode for Page Up and Page Down are 92 and 93 respectively. See more keycodes here. 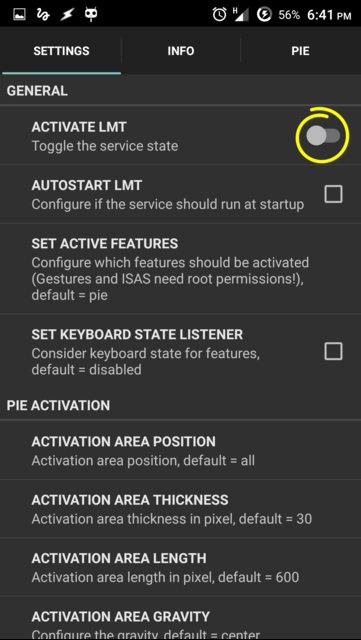 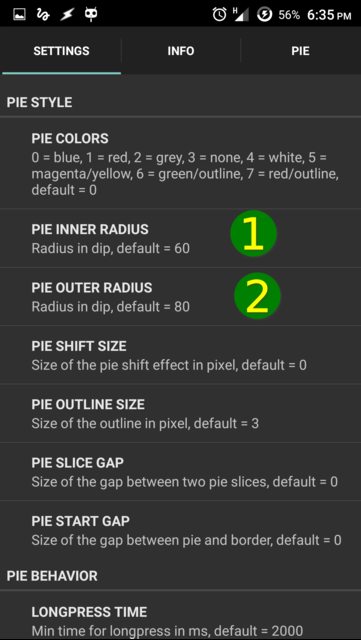 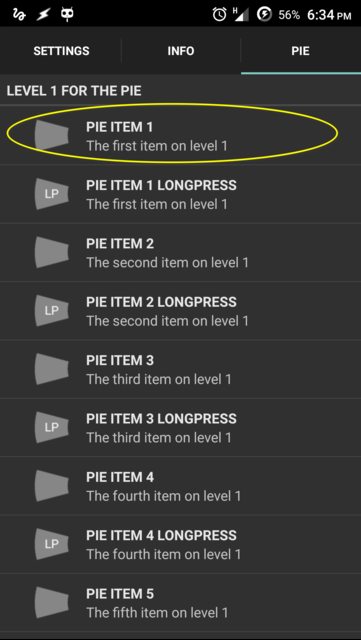 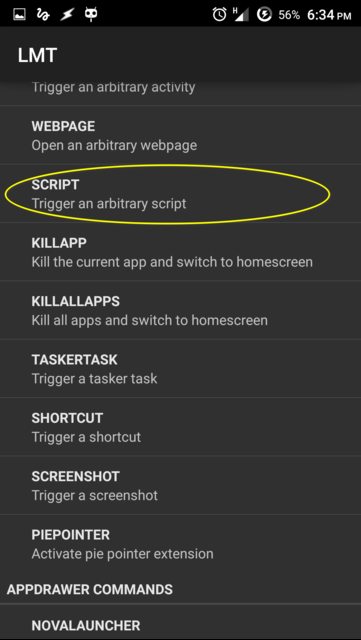 I tested my solution successfully on CM12. Here is a short ripped video (~6MB) showing the answer in action.

The old but good question. Answering it to myself, I came up with using MacroDroid alone for this. At least now volume up/down scrolls one page in Chrome. The method might be applied either to another program or to other options inside MacroDroid, for example buttons on screen:

Hacker's Keyboard has Page Up/Down keys which default browser and Chrome handles properly. You can even make it appear outside of input context with "Use permanent notification" option. That doesn't help much since having keyboard open all the time is a bit absurd, but proves the point that an app for having global Page Up/Down could exist.

PS. Dolphin browser also has an option for mapping Volume Up/Down to scroll by page and that's what I'm trying to use right now.

It isn't available in the Stock Android Browser or not even in Chrome. But UC Browser provides this functinality of scrolling exactly one page at a time. You can use the "Scroll Buttons" or "Tap to scroll" or the "Volume keys" feature by installing UC Browser for Android. In the UC browser Settings page you can do configure the scroll style and it resembles the same Page Up & Page Down key actions like we do in our desktop keyboards.

Scroll Buttons: A virtual Page Up and Page Down arrow buttons are added at the right hand side of a webpage.

Volume Keys: You can also use your volume rocker keys to scroll the screen page one by one. Pressing the Volume down scrolls the page once downwards and pressing Volume up scroll the page once upwards.

For enabling this feature, 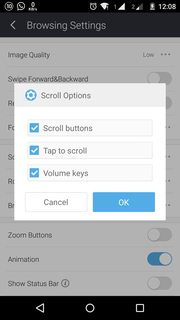 Note: You can also enable all the three options at once. But I recommend to use the "Scroll Buttons" option as it is easy to use and works fine for all pages. In Tap to scroll, clicking link will open the links and will not scroll the page up/down. So tap an area where there are no links available.

The need of using an Xposed module can be removed from my answer here. We can use Tasker and a very useful plugin named AutoInput to simulate page up/down using Volume keys.

You may now launch Chrome. Use Volume Up/Down to find that they would not change the ringer volume but would scroll up/down the page you've opened up in Chrome. Switch to another app not selected in above steps or close Chrome and those hardware keys would function as normal.

Note: It's not butter smooth as my linked answer but it's not sluggish either. If you're not comfortable with Xposed framework or modules then this answer would help for sure.

Nobody brought up a physical keyboard. So that.

If you have root access, Tasker can do down button presses even without auto-input. This is still relevant for Android 4.4.4. I could get this to send a page down button, but it has peculiar triggers, like headset volume or media buttons.

The Button Savior (Root) app is promising, but I don't have a rooted device. Did not go anywhere with this, because it seems to not send the keystrokes to the active app.

UC Browser has two kinds of tap scrolling. You can configure it to scroll up if you hit a non-link portion in the upper half of the screen or vice versa to scroll down. You can also elect to display two arrow buttons (that you can drag around the screen so you can position them to your liking) for tap to scroll.

You can get it here: https://play.google.com/store/apps/details?id=com.UCMobile.intl

Note: As I write this, the UC Browser HD (specifically for tablets) does NOT have this capability.

Tasker allows creation of Scenes. We can use scenes to create virtual buttons on the screen which can work as navigational keys to scroll up/down/left/right on the screen.

This answer would make good use of all of my earlier answers written on this page. It goes without saying that root access would be needed than.

(Some mundane scenes I created; click image to enlarge) 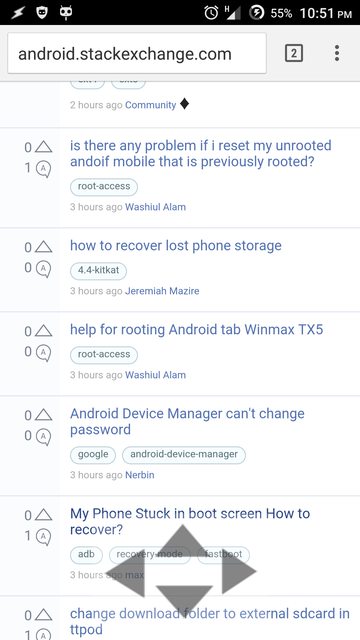 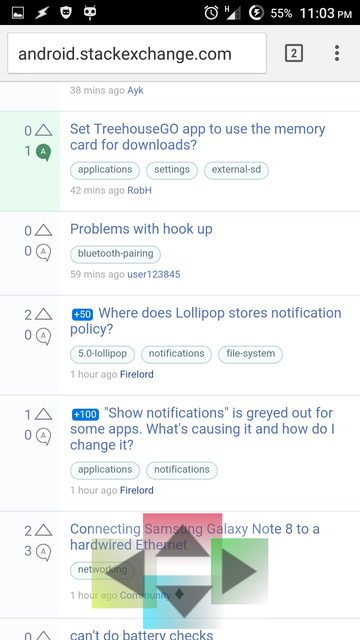 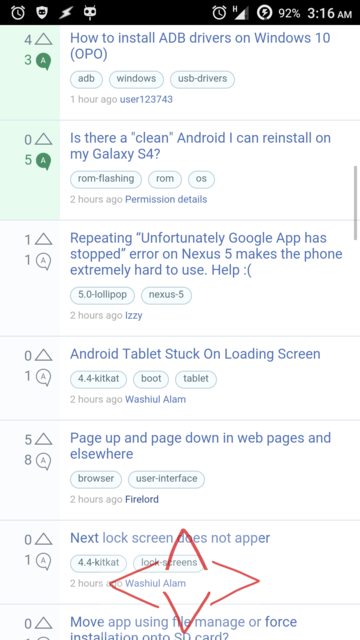 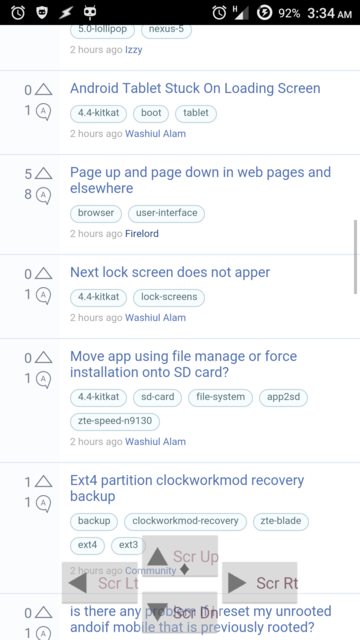 (Excuse the drawing because I'm no good in it and neither I've tasted the power of scenes yet. Nevertheless, you can see how they are acting as navigational keys.) 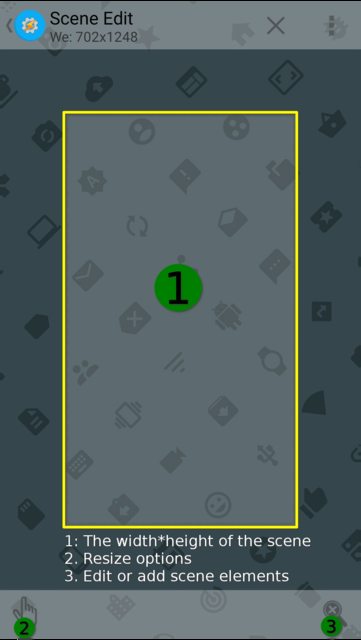 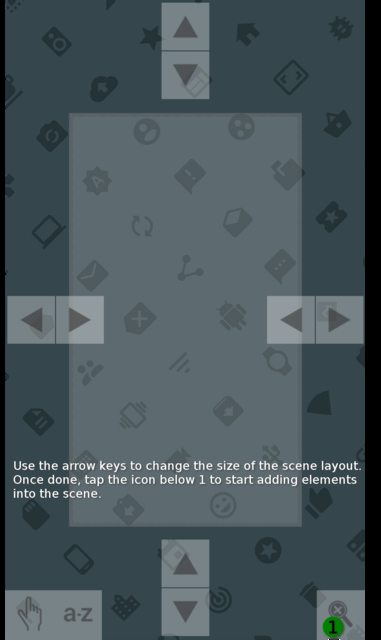 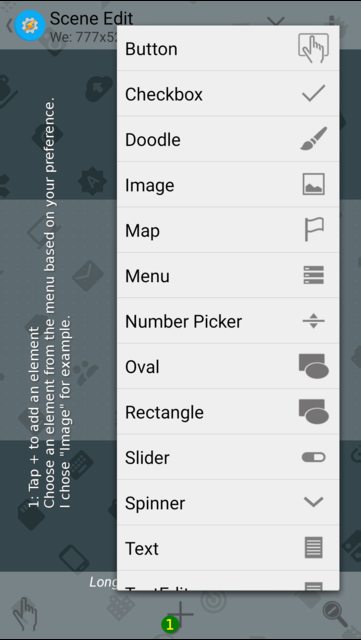 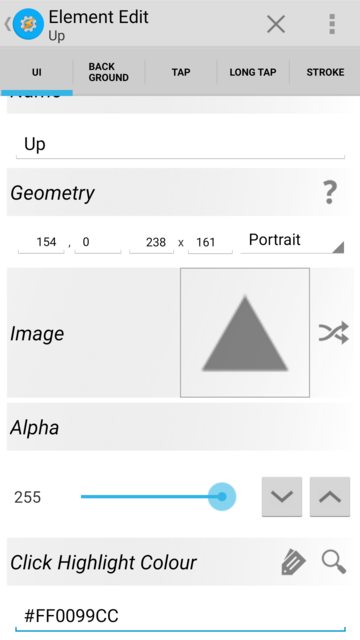 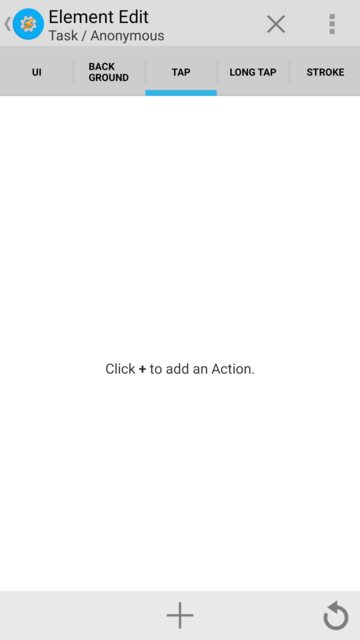 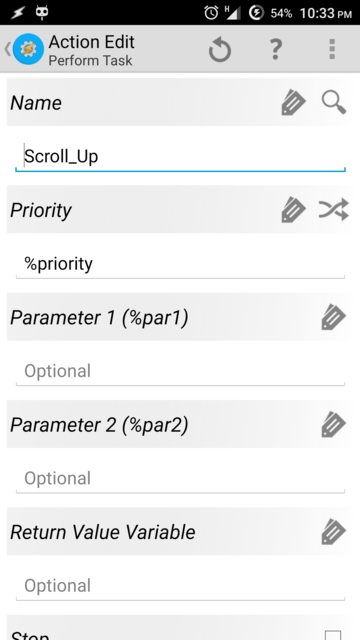 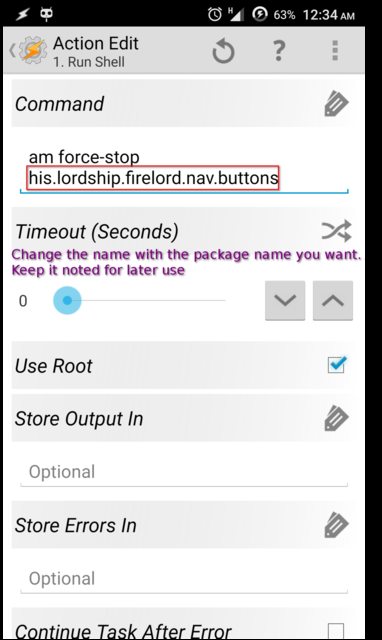 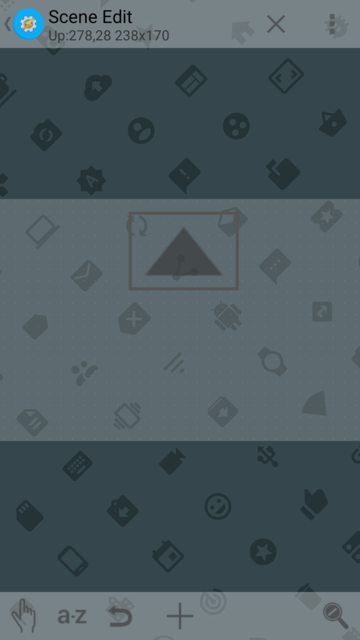 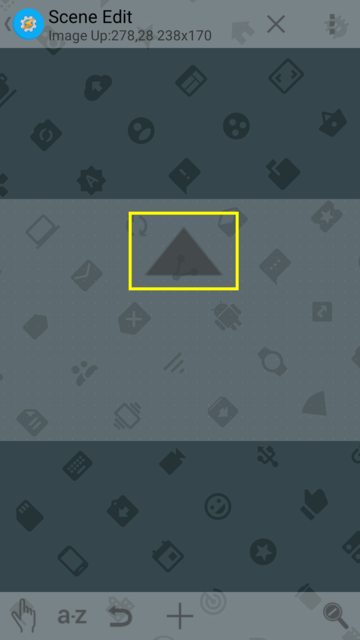 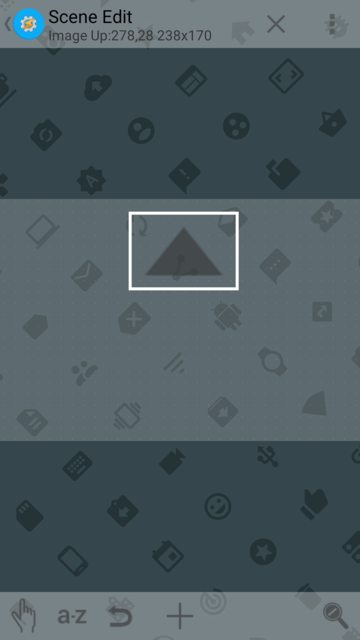 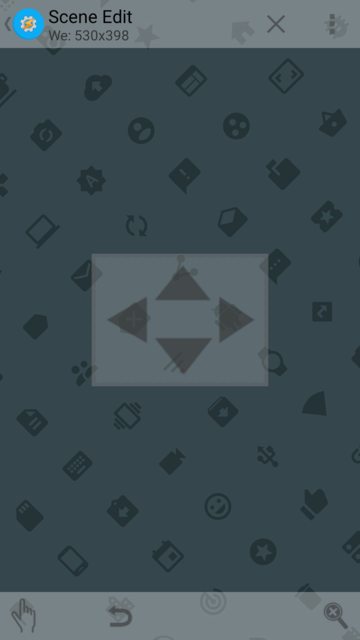 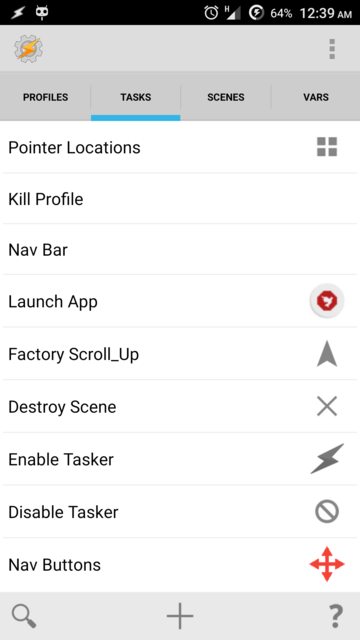 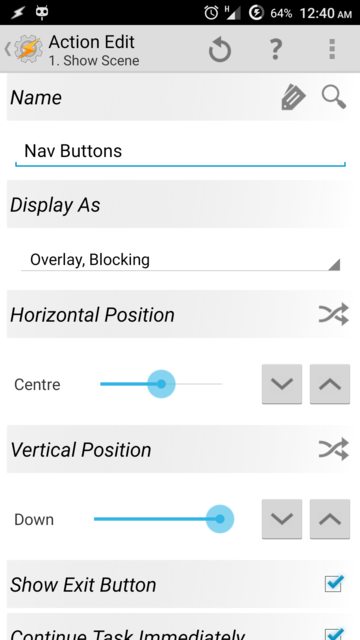 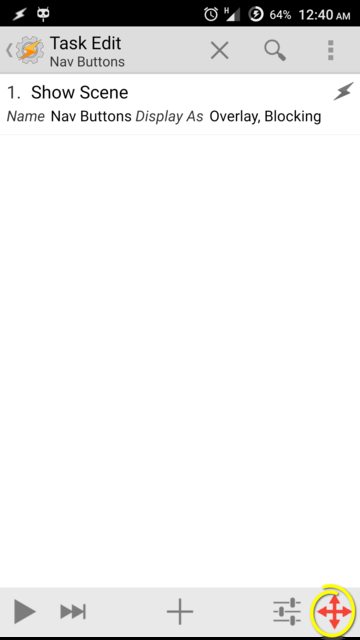 Now, at this point we have multiple choices to proceed with the scene. You may,

You may use Tasker App Factory to transform a task into a full-fledged standalone app (read: Tasker independent) which can be sideloaded into system just like any other app and would work as if you're executing a task using Tasker itself.

The good part is that app creation using Tasker and Tasker App Factory is legal, so one can distribute it at his/her own will.

You want more! Right. The biggest hurdle of depending upon commercial apps is pretty much solved in this particular case. If you do not own or do not want to buy Tasker but a person known to you has it, then you may kindly request that person to create an app for you. You may stick to the basic approach needed for navigational buttons mentioned in the current answer or give a chance to your own imagination.

Also, one more goodie. You can use that new app with any of the five options that I've listed for a Tasker scene. I've successfully tested all of them.

Create an app from a task in Tasker 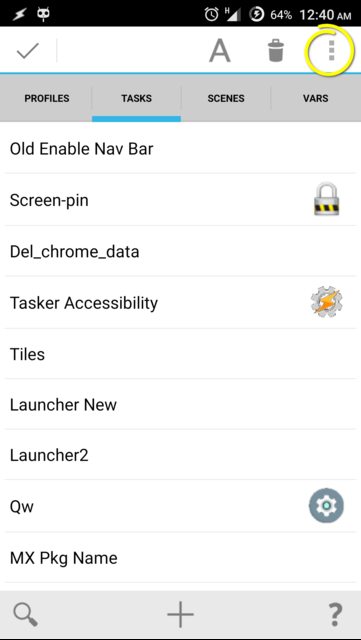 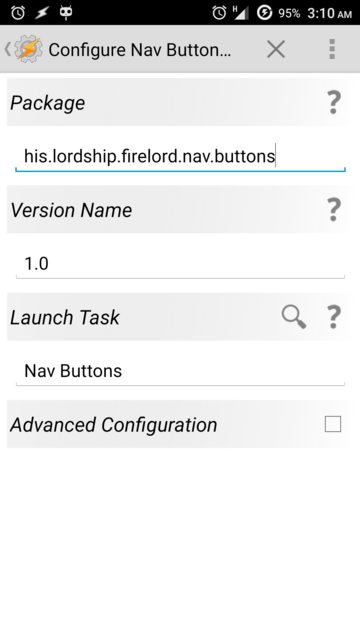 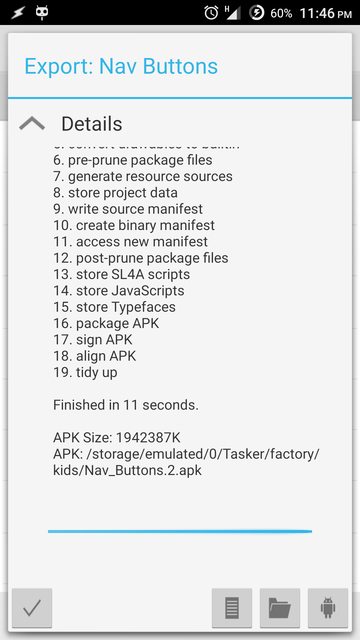 I've created a demo app based on the current answer, hosted on my Google Drive. Find it here. The permissions it require are: 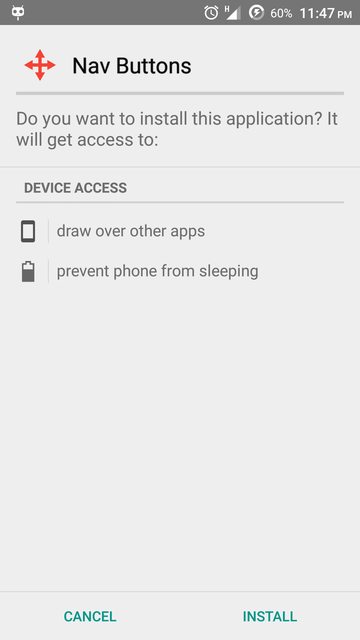 (App icon made by Freepik from Flaticon, is licensed under CC BY 3.0)

There's is a slight problem here. While I was able to successfully test my app independently on my secondary Lollipop ROMs on the same device with same resolution, the app didn't work satisfactorily on my other but low resolution device. Oh well, what can I do!

44
Where are the developer options in Android 4.2?
6
Stop Media Playback through adb
2
Enable software menu without virtual keys
3
Turn on flashlight when volume button is held
0
Is there any shortcut to turn on flashlight in Android?
2
Unlock different Apps from lock screen
2
Turn bluetooth on when screen off and volume key is pressed
1
How to create nested folders on home screen in Lollipop?
1
Page Down and Page Up Don't Work
1
open multiple URIs with one click (similar to desktop Firefox "open all in tabs")
See more linked questions

6
How to drag in the web browser without moving the page?
2
Unable to login and load web page in Sony Ericcson W8
7
App to automatically download and view a list of web pages offline
2
How do I zoom web pages?
1
Playing VLC streams directly from web page?
1
missing glyphs on web pages