What's the deal with Deno? We talk with a major contributor to find out. Listen now.

I played ~2h of Netflix on my Nexus 5, on T-Mobile's LTE network early this morning. I had switched off WiFi. After doing so, the data usage screen looks like this (scaled down): 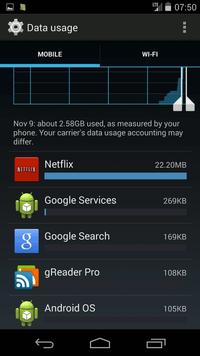 Note that the phone reports 2.85GB of data used, with the top user being Netflix at 22.2MB. That's different by two orders of magnitude; and nothing else on the list comes close to making up the difference.

T-Mobile gives a different number still (~1.3GB). The screen notes that may differ. But it confirms that the data did indeed go over T-Mobile.

Why is Android under-reporting the data used by Netflix by two orders of magnitude? Is there some way to get accurate data usage stats (I'm rooted, so root-only solutions are OK).

edit: Checking /proc/net/xt_qtaguid/stats shows Android is reporting on rmnet0 while reality is on clat4. Not really a solution as that file reports since boot only, not a particular time range.

Browse other questions tagged mobile-data data-monitoring 4.4-kitkat netflix or ask your own question.