How can I group apps together in the menu view?

The menu view of the phone lists all of the apps I've installed. All of them.

Is there any way to group them into folders in order to reduce the clutter?

Note (1): I am using a Samsung Galaxy S with Froyo

Note (2): My phone's GUI is in Hebrew, so I may be getting the terms wrong. This is what I mean by "menu view": 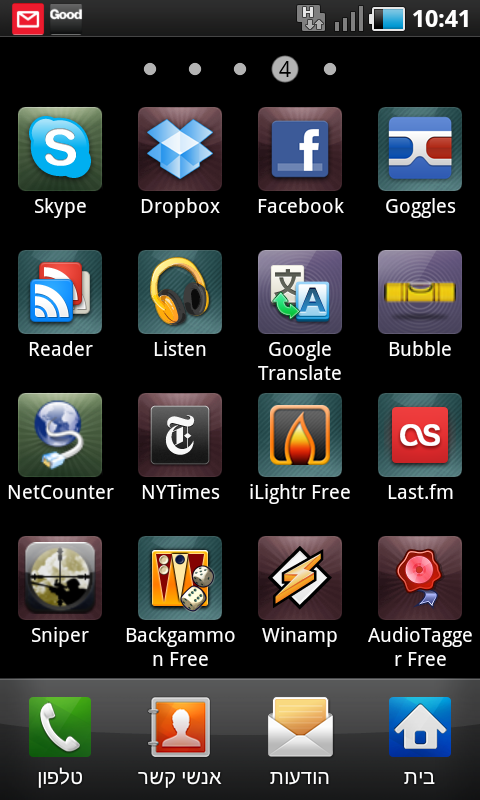 That screen is meant to be just a list of your apps. As you're using Samsung's built-in TouchWiz interface, one thing you can do is move those apps around, so that they're in an order you like and related apps are on the same page. Just press the Menu button, and press Edit and you should see little (-) signs appear on the apps, now you can drag them around to change their order, or drag them to the left or right edge of the screen to move them to a different screen.

However the better way to do this, is by arranging the apps on your home screen, rather than the apps list.

You can have up to 7 home screens on a Galaxy S, and you can add things like Folders to the Home screens to further organize your apps. Think of the home screen as being a bit like the Windows desktop, you can add/remove/organize shortcuts to apps here and even delete them as much as you like and it won't cause any problems.

On a Galaxy S with TouchWiz you can add or remove Home screens (up to 7 of them) by going to the Home screen, pressing Menu, sleect Edit and then either press the (+) sign if available to add, or drag a screen to the Remove area at the bottom to remove. If you have Froyo (Android 2.2) you can also do a pinch zoom out on the Home screen to swap between screens, or add/remove screens.

Not the answer you're looking for? Browse other questions tagged applications samsung-galaxy-s menu app-drawer or ask your own question.

4
Suddenly can't find several apps in Market
7
“incompatible” apps through google play market
0
How do I make the apps/widgets view the default view?
2
Remove folder from App Drawer in TouchWiz (not home screen / app launcher)
0
How can I run an installed system application that doesn't appear in the app list?
1
Cant' uninstall app; it shows up on home screen but not app drawer or installed apps list