Google Maps runs GPS in background even if the GPS radio is off - how do I fix?

I have the T-Mobile version of the LG G2, running Android 4.2.2, everything stock except the keyboard. I'm not sure what version of Google Maps, but the Play Store says it's up to date.

Yesterday I noticed that the G2's battery was draining a lot faster than it had been. I had thought it was just because I had been listening to music a lot more that day, but then when I checked the battery app that night it said that Google Maps was responsible for half the battery drain. I had used it earlier that morning for directions and it had apparently run the GPS in the background for 11 hours straight. I thought it was a one-off, but it happened again today. I've attached a screenshot.

The GPS on my device is off as far as I can tell (i.e. the visual indicator in the tray is dark), so I don't know whether Google Maps is turning it on stealthily and forgetting to turn it off, or whether it's trying to find a GPS signal, can't because the radio is off, and gets stuck in a loop looking for it. I'm assuming the former because there's no CPU activity, just GPS. When I click the "Location Services" button, these are the settings:

So it shouldn't be happening. Why does this happen and how can I fix it? I suppose I can just remember to force stop Google Maps every time I use it, but I'm hoping for a better solution. 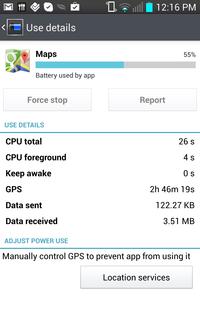 Google Maps is known for situations like this for years. It doesn't happen all the time and on all devices simultaneously with all versions of maps, but comes often enough. For me, the decision was to disable/freeze Google Maps, and use other Map apps (Locus Map, OruxMaps) instead. But let's go into details how an app (in your case Google Maps) can be "put on ice":

On a rooted device

A rooted device gives you the most alternatives. Say you want to use the app from time to time, you could use the following approach:

If you do not need the app anyway, and rather use another replacement, you can freeze it permanently. A freeze marks an app as being "unavailable", so it can no longer be started. There are multiple apps which can handle this, as e.g. before mentioned Titanium Backup or App Quarantine. Using Titanium Backup would give you an advantage here: TiBu let's you place a shortcut on your homescreen to freeze/unfreeze-start an app, basically emulating the "dynamic freeze" described above. No need to convert the app into an user-app for this.

Many apps register so-called "broadcast receivers" to be notified on system events they are interested in. The best known certainly is boot_completed for apps that want to become active right after the device has booted up – but there are a lot more. Examples include the change of network status (true for our Google Maps candidate), battery-low, or the SDCard being mounted. On a rooted device, you can disable those "listeners" with so-called "Autostart managers". One of the best is Autorun Manager in its Pro-Version. If using those, take care to not disable too much, as that might render an app unusable.

Without root, I know of only one way to achieve something comparable:

Now the app is de-activated, and should no longer run. I explicitly made "should" in italics, as to my experience often this is only a partial working solution: though the app is removed from the drawer, it seems it's still not completely out-of-reach for certain frameworks.

Not the answer you're looking for? Browse other questions tagged 4.2-jelly-bean battery-life gps google-maps lg-g2 .

0
How can i make my google maps app close?

24
How does Google Maps estimate my location without GPS?
1
Can I turn off autocomplete/autocorrect for Google Maps?
3
why does my GPS not work in Italy without WiFi?
2
Full Google apps access to location needed for maps with GPS?
0
How is it Google Maps works without data?
6
How can I share my current GPS location from google maps?
3
GPS when roaming with no data
1
Google Maps >9.60: Can't access the layers. How to turn off/on layers?
0
It the any map app which is using google maps APIs but work perfectly without GPS?