How to show only gmail's contacts in the Contacts app?

I have recently reinstalled Android due to some problems with the SD Card. I decided to keep all my contacts only in Gmail, as a centralized solution to avoid problems in the future. I do not want other SIM or phone contacts to show in the contacts list anymore.

However if I try to uncheck both the SIM and phone contacts and I do check all possible google contacts groups and the option for showing only contacts with a phone number1, no contact is shown at all.

How can I prevent this?

1 Having or not this option active doesn't change anything. Even if it is not active no contact is shown.

Updated To make things clearer, here are some screenshots of the situation:

Here I have set only the phone contacts (Contatti del telefono in Italian), without google contacts: 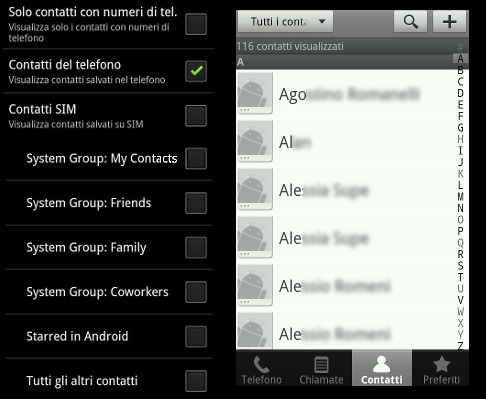 Here I have added the google contacts in the options and they are shown (see red rectangles. Note the number of contacts at the top going from 116 to 156): 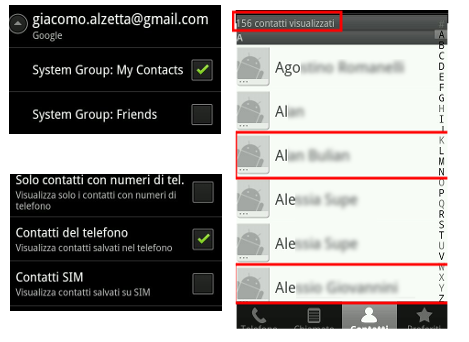 Now, I'd expect that removing the phone contacts I should see only the google contacts (in this case those that above have red rectangles and the other not shown), but this is what I get: 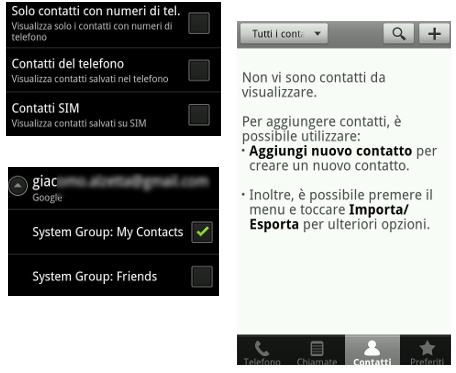 On the right it just says that there are no contacts to show and that I can add new contacts or import/export from other sources.

What should I do such that this last set of options does show the google contacts?

Be sure the following are checked:

The easiest way is to get the Gmail app from the Play Store.

First Type any number(s) select save option then it will show u options blank fields. Along with those fields find the option (it will be on top) or drop down like menu embed depending upon android phone model ...ok

The blank fields to save will change upon selecting type of field u selected.

Second by Default it will be in SIM or phone or ur Email by the time ur checking which else is there the option in that only contacts are saved.

Thirdly For saved contacts goto contacts >options There scroll and find "contacts to display" I hope ur problem must have been solved..

Finally coming to still other handsets like karbon, celkon, micromax.. soo called china handsets in india. Previously it is found to be they doesnt have any proper sync options.

Example in costlier and top brand handsets contacts sync with g+, FB ...etc and give users suggestions to choose contacts still in social & chat apps were else it is not that much we can expect on unknown handsets.

What i mean to tell u is contacts matching nearly to ur already saved.

one more easiest way if possible to you add contacts directly from gmail in a PC. But login with the email ur using and require after logout, sync in mobile check contacts.

Recently it is seen contacts directly saved to viber, telegram,..etc contacts not Synced with any other app or phone.

Not the answer you're looking for? Browse other questions tagged contacts 2.3-gingerbread gmail google or ask your own question.

1
Hide contacts with only email address
1
Empty SIM contacts list, but they still show up in contact details
1
How to save all contacts to Google with a broken SD card?
0
GMail Contacts Synced To Messaging App
0
Why are some contacts shown several times?
0
Wrong phone number for contacts are shown and called
0
SIM contacts do not show up in my lenovo k6
3
Dialer & Contacts app display duplicate (WhatsApp)
1
Importing the Telegram contacts into the phone book - Android