When two applications are competing for the same task, how do you turn one to be the default?

For example I downloaded a Snap camera app and I'd like the stock camera app to be the default.

What do we do to set the default apps for the different tasks on the system?

Are there centralized settings on Android?

what do we do too set the default apps for the applications running on the system?

I assume you meant to ask how to set default apps for certain actions/tasks, such as taking a picture, writing an email, opening a web page etc.

The answer really depends on which version of the Android OS your device is running, and also to a lesser extent, who the manufacturer of the device is.

If you consider a Google Nexus device running the latest version of stock Android (4.4 KitKat), the OS presents you with a picker dialog to select which app you would like to launch to complete the task. In the screenshot below, I attempted to launch a camera to take a picture: 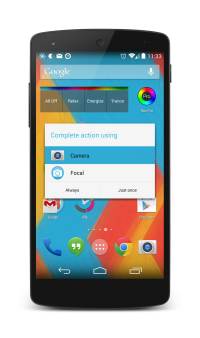 You can select one of the options and then select "Always" or "Just once". As the buttons indicate, your selection will either persist for future tasks or you'll see this picker-dialog every time.

If this list changes because you uninstalled the app that you had marked as "Always" or if you installed new apps that can handle the same task, this dialog will be presented again.

Certain device manufacturers (or OEMs) may choose to modify this behavior as part of their "skinning/customization" of Android. HTC famously changed this behavior for some of their devices (for a slightly technical explanation of their change, read here). You can also see how this dialog picker has changed historically here.

what do we do too set the default apps for the applications running on the system?

You need to perform an action that multiple apps on your device are capable of handling so that the above dialog presents itself. It's hard to know when this dialog will present itself since apps and their capabilities change all the time. For example, if you installed a new camera app, you can make it the "Default" camera app by trying to launch the camera from elsewhere in the system or other apps (like hitting a button that says "take a picture").

is there a centralized settings on Android?

Short answer: No (but as of Android 4.4, you can set a default "Homescreen" app from the Device Settings-> Home. Note that you will only see this option if you have multiple Homescreen apps)

However, if you did set an app as the default handles for certain tasks, and you wish you no longer keep it the default, you can navigate to it's "App Info" page (Device Settings->Apps->pick your app) and hit the "Clear Defaults" button.

Not the answer you're looking for? Browse other questions tagged default-applications .

6
Can I set the default browser differently for different websites?
10
How to set default action handler permanently?
3
Setting Defaults for Links
1
Set an app to be default without clearing old first
2
Change the default app in "Open with" dialog
13
Setting Default applications through ADB
3
Stop automatically setting apps as default
5
How to assign default app to unlisted file type
1
Can I set Parallel App or Dual App as a default app?
5
How Do We Set the Default Camera App in Android 11?