I have downloaded a web server program, and when launched it gives an IP address to access it through port 8080. However, nothing happens, so I can draw the conclusion at these possible problems:

Now, in general, the program is installed in the SD card, the SD card is obviously mounted, and it automatically is set to access itself in directory format as follows: mnt/sdcard/server/

However, the HTML files are stored following: /server/HTML/index.html

I do not know how it is, by default, configured, and there's very many configuration files in Extensive Markup Language(XML). So, these following questions I directly ask:

The server app is: PAW server. Despite following its instructions just fine, nothing loads when the IP address is typed in, and a "welcome page" reportedly should. 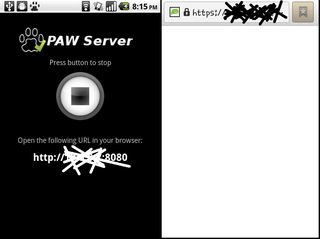 PAW is supposed to show a "welcome/sign in" page by default configuration, I believe.

After trying everything you have, I'd suggest it would be best to ask the developer for help directly.

Those are called loopback address and should always refer to the machine running the program.

Is there any default blocking of port 8080, or otherwise noteworthy issues that could explain this port number, the local machine connection to it, etc.?

Unless your device is configured otherwise (e.g. with firewall or iptables), when an application have privilege to full access to the internet, they will be able to connect to any port and listen to non privileged ports (specifically > 1024).

Many network providers have firewall which blocks incoming ports, which can interfere with your ability to connect to a device if you are using your external IP address or machine name. loopback addresses are resolved locally and can only be blocked by a local firewall.

No it isn't, and it shouldn't.

Is there any standard way server software is configured/set up(so I could maybe tweak around with a goal specifically in mind)?

Refer to your web server documentation.

Not the answer you're looking for? Browse other questions tagged root-access internet mount web-server or ask your own question.

5
Windows laptop works with Wi-Fi AP, phone claims it is connected but can't access Internet
4
Can't access tethered server from Android browser. (Time out or "URL blocked")
5
Accessing a web server running in Android emulator from my local machine
1
Accessing Port 8888 in Android Web Browser
1
Why Can I Not Access My Devices Localhost Over Data?
0
mount: Permission denied (when mounting /system directory on android device)
0
Run PHP MySQL web application on Android
0
What can be the reason for "internet may not be available" though the IP address was got
0
Syncing with (local) desktop taskwarrior server on Ubuntu 16.04 on Windows 10