Whenever I download the Facebook app for my Android phone (Motorola Razr D3) it shows up normal for the first time but then changes to a strange interface and then stays that way. 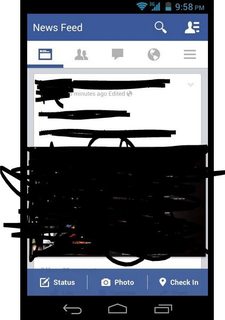 I've tried deleting it and then downloading it again and again but it keeps changing back, what is this? What should I do?

I would say you are very lucky to have that UI (user interface). I've been waiting to get that version, to no avail.

What you have is the Holo-fied UI of Facebook, which I think was initially available to selected alpha testers of the Facebook app. A group would get the Holo version, while the rest would get the regular version. This concept is called A/B testing. Eventually, if there are no more issues, everybody will that that UI. Have you, by any chance, applied as an alpha / beta tester?

Holo, as described in WikiPedia, is the Google recommended theme for the design of Android apps, introduced with Android version 4.0.

Is there a way to change the interface? NO, because the UI is determined by Facebook's servers. If you attempted to download and install (by sideloading) a Holo-fied version of Facebook, and you were not given the rights to have this UI, you would be reverted to the regular UI. This is the reason why Holofication Nation cannot make a custom Holo-fied version of Facebook. To date, they have already released a Holo-fied UI for Grooveshark, Steam, and Instagram. (and I think for CNN too!)

Not the answer you're looking for? Browse other questions tagged facebook motorola-droid-razr or ask your own question.