I have a Sony Ericcson Mini Pro (Codename “Mango” at CyanogenMod) with CyanogenMod 9.1.0-mango. This is Android 4.0.4.

When trying to connect to a wireless network, it will be stuck in an “Optaining IP Address” loop for a while, until it shows “Bad Connection”. This is what it looks like in the wireless network system settings: 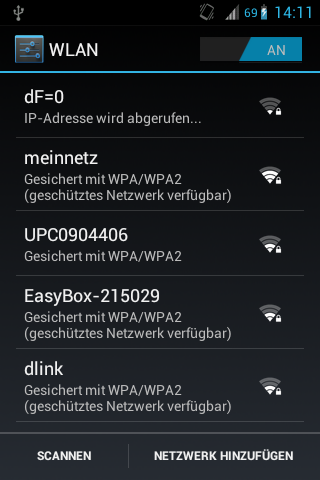 My tablet with CyanogenMod 10.2, Android 4.3, can connect to that wireless network without any problems, so can my Kubuntu 13.10 laptop with an Intel wireless card.

While looking for the cause and a fix for the problem, I found numerous posts that suggest to use a static IP address. This is a legitamate workaround, and I might resort to that, but I would like to fix this in general.

How could I fix this apparent DHCP issue?

This exact symptom can be fixed by changing permissions on

to execute on all accounts: user group and others

As you described that on static IP, the connection works, this leads to the problem with the setting to your router of yours.

For that, you need to login to 192.168.1.1 as admin when you are connected to the router. (Please use a laptop to get all functions of the router since many routers have desktop UI settings only.)

Go to settings and search for advance setting which has DHCP setting. Now, check for the range of DHCP WiFi IP addresses. You may need to increase the range.

I had the same symptoms while cooking a ROM when the symlink of /system/bin/sh to mksh was missing.

On the router, set static IP addresses. If that doesn't fix it, go to Setting > Wifi > Select your network and go to Advanced settings. There, select (input) an IP address that is not taken, such as 10.0.0.24. That should fix the problem.

Try changing the WiFi channel in your router settings. This fixed the issue for me.

7
Device stuck on "obtaining IP address", then sets network to "disabled"
1
Galaxy S2 ICS 4.0.3 Wi-Fi connecting but not able to browse
26
How to make android prefer mobile data when wifi signal is very weak
7
WiFi network not accessible with modified MAC address
2
Reset DHCP cache for Asus Memo Pad HD7 'Avoided due to poor connection'
0
Cannot connect: Obtaining IP address
0
What can be the reason for "internet may not be available" though the IP address was got