Why is com.google.android.gsf.login warning me that I need to install Google Play Services?

This is a Nexus device running the latest stock OS version (v4.4.2), I already have Google Play Services installed (v4.2.43 according to the App Info in settings). Why is some unknown app asking me to update it? (I realise that the com.google.android part of the package name indicates that this probably an app made by Google that is probably part of their Google layer on top of AOSP Android, but why the odd error message and lack of proper app name)? 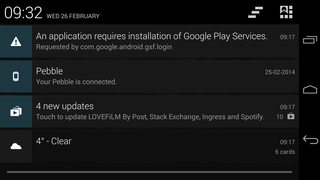 Clicking the notification from Android's notification bar takes me to the Play Store's page for Google Play Services where the latest version mentioned in the "What's New" section is 4.2.42, which is older than what I've already got installed, and I don't have an Update button (which suggests I'm already running the latest version).

I have had a similar issue on my Nexus 4 device, here is what I did to stop the issue:

Go to your 'Settings' menu, then go to 'Accounts'. Select 'Google' and check which google service has a sync issue. If you cant see any apps with sync issues, you will have to do as user 'Laural H' mentioned above: disable them all, and re-enable them one by one, checking that it syncs properly (before enabling the next one). When you find the app with sync issues, open the problematic app and login with your google credentials.

You could try installing the newest version of Google Play . If you don't want to do that, try one of these:

Not the answer you're looking for? Browse other questions tagged application-autoupdate google-play-services .