Recently, mm-qcamera-daemon has been causing massive battery drain on my Nexus 5, and making it become rather warm. At the same time, the camera appears to be locked, meaning opening the default camera app (or any camera app) causes the alert Camera is currently in use to appear.

Numerous forums around the web site apps such as Snapchat and a Yahoo video app as the issues, but I've never installed these apps before.

Restarting the phone does seem to fix the issue, but after awhile (more than 12h) later, the battery starts draining again. 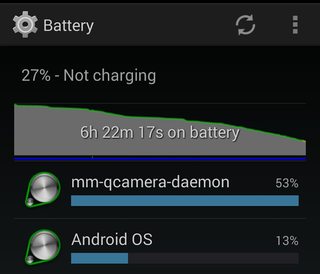 UPDATE: Like the top answer says, this problem should have been fixed by the 4.4.4 Kitkat update that rolled out.

Wait for the next Android maintenance update:

Thanks, everyone, for reporting about this problem.

We believe we have fixes for the current high CPU reports on N5 due to mm-qcamera-daemon, and they will be included in the next maintenance update. At this point, we don't need more reports of the problem, with some exceptions I'll detail below.

We've had scattered reports of persistent high CPU usage of mm-qcamera-daemon since our last maintenance update, and based on those, found a number of bugs that were then fixed.

More recently, there's been a significant increase in the frequency of reported problems. These may be related to a recent update to Skype, which seems to access the camera regularly from its background service in some way that triggers this bug (note, we don't currently believe there's a bug in Skype itself). Investigating this, we've identified a few additional fixes that we hope resolve this issue for good. However, since the high CPU usage is an intermittent problem, we're continuing to test our fixes to verify the problems are gone.

Unfortunately, I can't provide an estimate for when the maintenance update will be ready, due to all the testing we need to do for this and other fixes. Until then, rebooting the phone is the only way to stop the high CPU usage/lack of camera function once it starts.

Uninstalling Skype may substantially reduce the likelihood of this bug appearing, but I realize Skype is a very important application for many people. Other camera-using applications may trigger this bug as well, but that's been relatively rare. Most applications also do not access the camera when not in the foreground, so they will only trigger issues when actively used.

I'd also like to note that instances of high CPU use of mm-qcamera-daemon on other devices besides the N5 need to be reported to their manufacturers - while those devices also use a Qualcomm chip for their camera processing (and thus have a mm-qcamera-daemon process), each has differences in their software and issues with them do not necessarily mean the N5 has the same problem, and vice versa.

If you are seeing high CPU use of mm-qcamera-daemon, and you have not used the camera at all, or installed an application like Skype that has a background service that accesses the camera (typically, applications that provide video chat may do this), we would like to know about it.

Otherwise, for Skype and other typical camera applications, we believe we have fixes identified, and you don't need to add more information to this bug - remember, any note added here will send updates to dozens of people.

I had this problem - after uninstall of Skype and phone's restart problem disapeared.

I have N5 4.4.2 - I understand that some camera apps can cause this issue - for me - Skype is camera application. At this moment the only non-system application with camera access is zxing code reader. All I know is that this error occured while I had Skype installed, and had not occured since the uninstall of Skype. I do not know if is it coincidence, or I "solved" the problem.

I had the same issue on my Nexus 5 (stock). mm-qcamera-daemon was draining 50% according to battery stats. The issue started when I tried to take photo from Hangout app, camera could not started. I don't have Snapchat or use Skype for video call from my phone.

I went to Apps and cleared data for Camera app.

Old: By far, I now see the percentage dropping to 24%. My phone does not get hot when using other apps as it did while qcamera service was running. 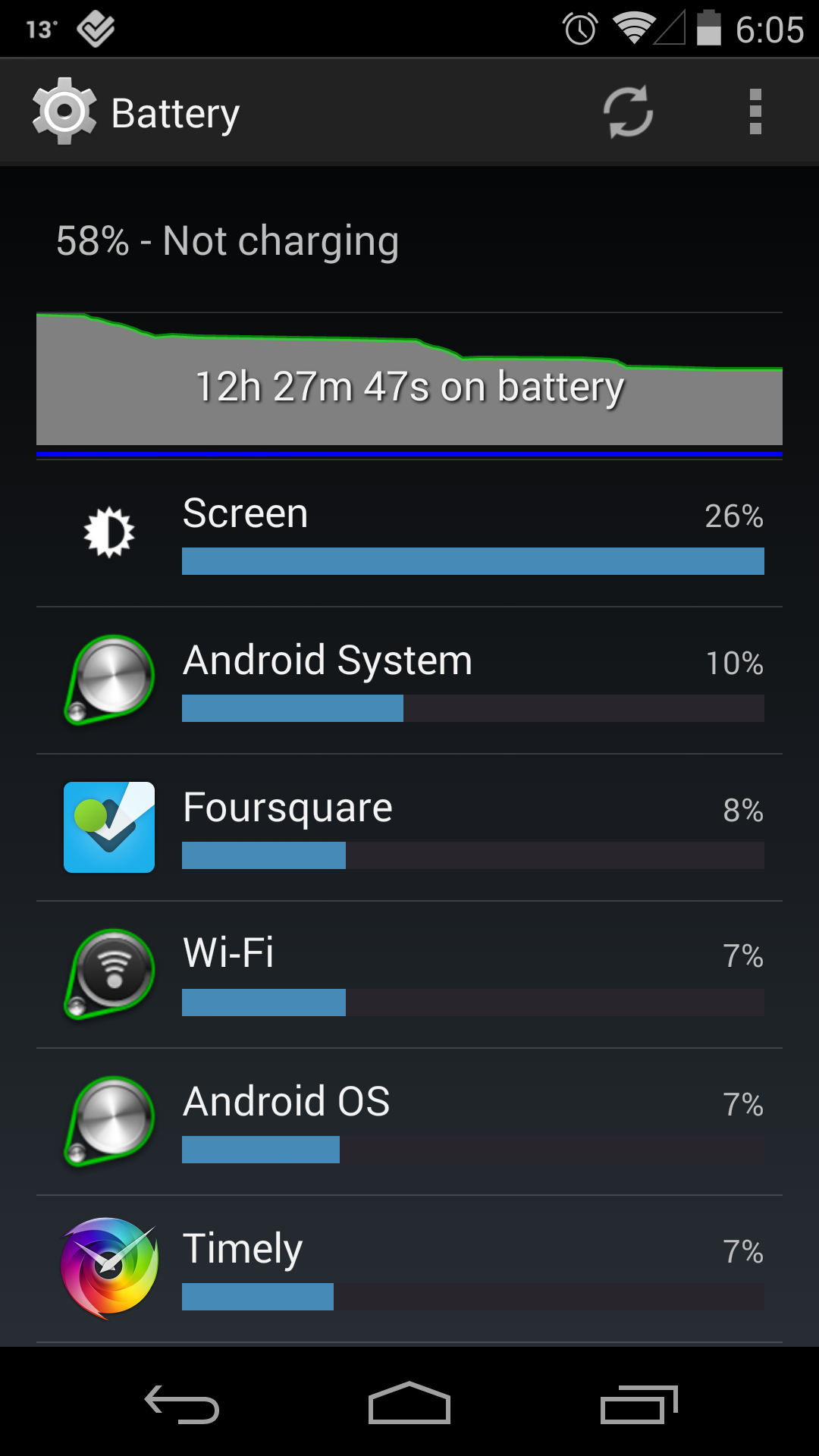 I can't say this is a fix or workaround.

I feel your pain.

In the Google bug thread, someone suggested a temp fix that worked for them. Install Disable Camera device ICS/JB.

While not being able to take pics without enabling the camera is a pain, randomly having a dead battery on your N5 is worse.

I have installed the app and will see if it helps me any. 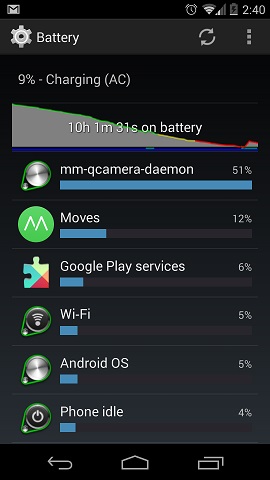 Not the answer you're looking for? Browse other questions tagged battery-life 4.4-kitkat nexus-5 or ask your own question.

13
What's causing battery drainage by “Google Services” while packet data is switched on in a 3G dead zone?
1
GPS Battery Drain — LocationManagerService
2
mm-qcamera-daemon wakelock when idle
0
Why is Youtube draining the battery and what could we do?
2
Spotting Cause of Excessive Battery Drain