Making use of the 2nd Partition on SD card (Link2SD)?

I don't know if I am just being stupid here or if I have infact gone wrong somewhere.

Basically. I followed the usual steps for using an SD card as App storage. Connected 2GB Micro SD via a Card Reader, Used MiniPartition Tool to split off a 512MB section. Both Primary with the 512Mb Being set as Ext2 and the first Partition remaining as FAT32 for media usage.

Put the card back into phone and added Link2SD followed by the Select partition type Ext2 and rebooted etc etc. Whole thing appears to have been done successfully as I can now move Apps to SD card. Obviously I still have the issue of a small % of data being on the internal but thats not an issue atm.

SO my issue I guess is this:

Why is that each time I add an App to the SD. Say for example the Facebook app at around 25MB.. Why does it deduct that space from my first Partition (the FAT32 Media part) and not the second partition (the 512MB ext2 partition) which was specifically created for this purpose?

This is how my storage info looks: 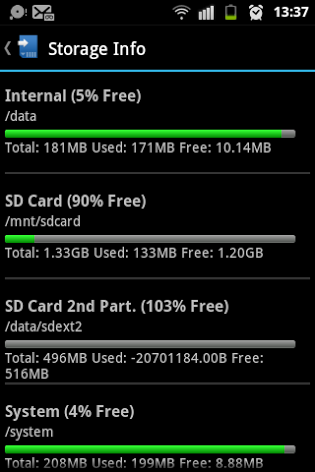 You need to use Link2SD to actually move the app to the second partition. If you simply use the built-in Android way of moving it to the SD card, then you aren't taking advantage of Link2SD at all.

In Link2SD, you can select apps and move them to the second partition. You can even set it up so that any new apps installed will automatically be moved over. Any current apps that were moved to the SD card using the native Android method must be moved manually to the Ext2 partition using the Link2SD app (though I think you can select multiple apps and move all of them at once).

First of all, you need to upgrade from Link2SD to Link2SD Plus so that you can move everything, including the data.

Move the app to phone memory, then create link, then check everything, then press ok. Then, the whole app, including the lib files, data etc. is moved on to the 2nd partition.

Not the answer you're looking for? Browse other questions tagged samsung-galaxy-ace partitions link2sd .