DLNA device is requesting access to media files on your phone

I got home from the airport today and I keep getting this "Grant access" pop-up ... 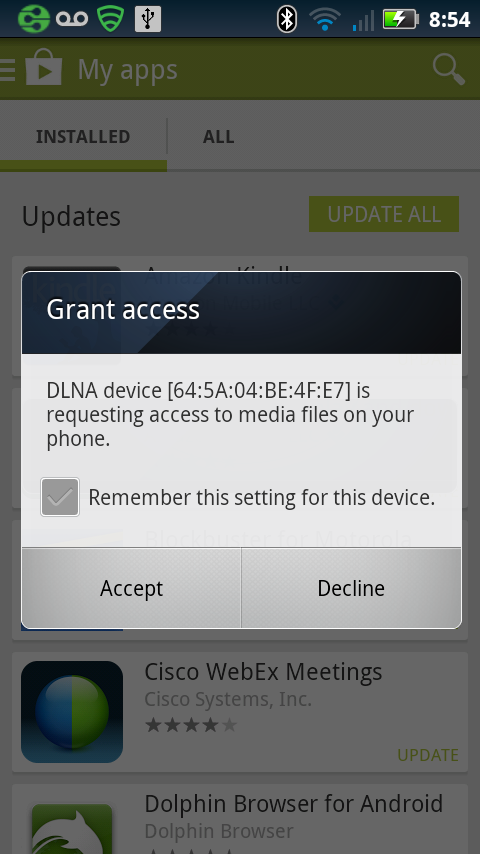 Very likely nothing at all got hacked. DLNA is a standard used for devices like phones, smart hard disks, smart TVs, and PCs to browse and share media files (videos, photos, and music).

It looks like your phone came with a DLNA server to make it easier for you to play/show media files on (for example) your TV. Normally, you'd go to a menu on your TV of connected DLNA media sources (devices offering media sources), and select your phone. Your TV would then connect to the phone to get a list of what media files it has, and this warning would come up before the phone responds, to check that this is a device you were expecting (and not, say, someone's laptop on the Wi-Fi network in Starbucks).

If you've identified this device as your laptop, then it must be some software on that that's making the request. It's possible that it is malware running on the laptop, but more likely, it's some normal media-player or photo-manager software. Even if you haven't explicitly told it to scan for files on your device, it simply be trying to connect to your device when you are browsing for an unrelated media file, or indexing in the background to help you find files more easily in future.

If you've left the DLNA server in your phone turned on while travelling, then you certainly aren't paranoid about security. It defaults to on to make it easier to use - most people would never realise it was there to turn on - but it's safer to leave it off until you actually want to use that feature.

Not the answer you're looking for? Browse other questions tagged security dlna or ask your own question.

22
Stolen phone: is changing your GMail password enough?
7
Are firmware updates secure?
1
android device as Digital Media Renderer (the DMR of DLNA)?
0
How can I block all incoming connections to my phone?
0
Can I get a virus on Android 4.4.2 by clicking “no thanks” on one of those virus browser pop-ups?
2
Photos/Media/Files and Full Network Access
4
Joining a public WiFi made the owner able to send me a Facebook friend request. How?