How can I enable USB debugging on my HTC One with Android 4.4?

I have recently updated my HTC One from the stock 4.3 firmware it came with to the stock 4.4 firmware via an OTA update. Since this update occured, I am no longer able to connect to the device with adb for the purpose of installing apps in development on a Windows laptop. adb devices tells me no devices are found HTC Sync Manager is also unable to detect the phone.

However, I am able to transfer files via MTP, something I was unable to do on 4.3 while USB debugging was enabled. Additionally, Windows detects the phone and installs drivers for the device (recognised as "HTC One" though some resources seem to indicate it should appear as "My HTC"). When USB debugging is disabled, it also installs MTP drivers. When USB debugging is enabled, it fails to install MTP drivers and states that the device was disconnected during installation. This does not appear to have any impact on the functionality of MTP however.

However, I have USB debugging enabled under developer options, I have my Android SDK completely updated and HTC Sync Manager fully updated.

As it turns out, the issue was that my phone was no longer being recognised as a composite USB device by Windows, meaning only one of ADB, MTP or HTC Sync was capable of running at a given time. After the update, MTP was always recognised first. This explains both the 4.3 issue of MTP and ADB conflicting, and the 4.4 issue of no ADB.

Step 7. If you could see your phone as the portable device on your PC, but there is still no "Android USB Device" in "Device manager", please try to manually update the driver for your phone. 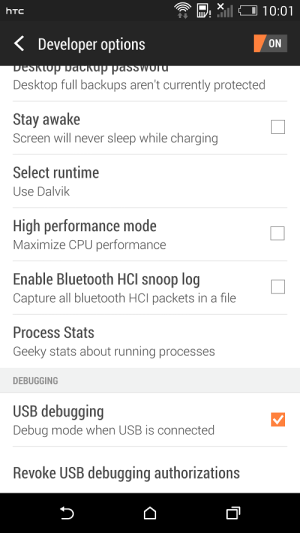 Not the answer you're looking for? Browse other questions tagged adb usb-debugging usb-drivers .

1
How can I permanently disable USB debugging mode?
4
Enable USB debugging for Android at Android Linux command
0
USB Android Debbugging, I've tried everything I can think of
2
How to fix "No device connected" for USB debugging in Android Studio?
0
Can not recognize Nexus 7 2013 version with USB
0
Enable USB Debugging with broken touch screen and no physical buttons