I own a Moto G running KitKat and a Chromecast, both are on the same network. The chromecast works for almost everything (Netflix, Youtube, etc) but I can't get the screen casting feature on my Android to work.

If the Chromecast is turned on, I can see a "Cast Screen" button on the android drawer, but upon clicking on it I get an error message that says "Casting Screen to Chromecast Name has failed"

I read a few articles some weeks ago saying that screen casting / mirroring was coming to Chromecast, so when I bought one and it downloaded a firmware update and the feature showed up on my android's screen, I assumed it had been released to the public.

How can I find out why it isn't working? 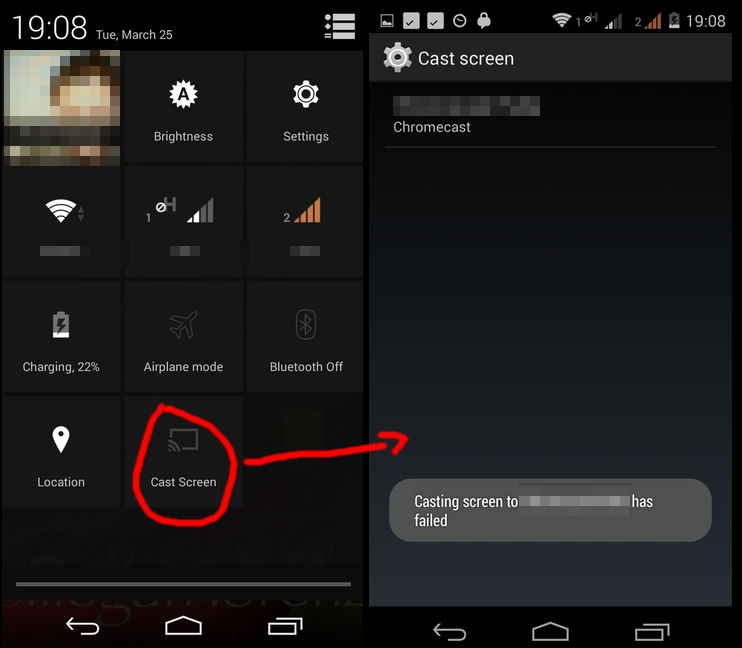 Casting your Android device to Chromecast is not officially supported. The Cast Screen tile shows up in certain conditions but at the moment it is not possible to cast your screen.

From the original article:

The Cast Screen tile seems to pop up for users of Nexus and newer Motorola devices when certain Chromecast apps have been used, for example AllCast. It's triggering something in Android related to an incomplete casting feature – that's all we can say for sure.

No one has, to our knowledge, gotten this native screen casting feature to work on a stock device – it just crashes when trying to connect to a Chromecast. (...) Presumably Google will fix this and expose it to users eventually, but right now all you're seeing is a stub of a future feature.

UPDATE - At Google I/O 2014 they announced that screen mirroring is coming in a future update of Google Play Services. It is expected that this will roll out in the next few weeks.

Not the answer you're looking for? Browse other questions tagged chromecast or ask your own question.

0
how to cast from samsung s2 and ipad mini to chromecast?
0
How can I autoconnect to miracast/chromecast (screen cast) device?
1
Nexus 7 2012 Lolipop screen cast problem
1
Cannot cast Android screen to Philips TV
5
What is the difference between MiraCast, MirrorShare, Google Cast and Chromecast?