What is filling my phone's RAM, if not apps?

My Galaxy S3 has gone from snappy to slow over the past few weeks: When I open or change apps it reacts very slowly. When the app is running that app is working fine.

It resembles having too little RAM in your computer: When the program you are using is swapped in, it works just fine, but when you open a new program or switch to a program that is swapped out, it is dead slow.

So I looked into the memory usage of my phone to see if that might be the case: 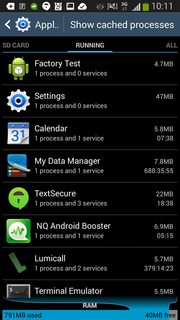 It seems my phone is using 750 MB RAM for something it will not tell me.

Others online have suggested the memory is just used for disk cache, but then it would never slow down the phone.

I have rebooted the phone and then the unaccounted usage goes to 500 MB RAM (Is that really the normal RAM usage for a freshly booted phone?), and the phone is much more snappy. That makes me think it is a memory leak.

How can I see what accounts for the memory usage not shown in the "Running Apps" page? How can I release it? If it is a memory leak: Can I add swap so that the leak at least is swapped out?

Browse other questions tagged performance ram or ask your own question.