is more battery-dispendious shutting down or leave 3g on?

I know that 3g has many state, when downloading data the consume is incresed, and when not in use (idle) it is less.

Since the apps are not synchronized toghether, the request from an app could be sent when 3g is just passed to idle state.

So i was wondering this: is more dispendious to shut down 3g and then reactivate it like 5 minutes later (to let apps download push notification) or just leave it on and let apps to use it when needed?

I know of cDroid which is a cloud-based android, and one of their feature is of course push-notification download synchronization.

Apps that use push notifications, such as the official Facebook app or Google+ Hangouts, don't need to repeatedly check for new messages. The server sends new messages to the phone when they arrive, without having to be asked. My answer to 'How do push notifications work?' describes this in more detail.

What you're asking about is apps that poll for updates, such as email clients (when getting email from a server that doesn't support push) or some kinds of RSS reader. If the app has a setting "Sync every..." with options like "Every 15 minutes," then it's using polling. Polling like this usually uses more energy than push notifications, but not for the reason you describe in the question. In fact, Android already provides a way for apps to synchronize their polling so that the phone only has to wake up once. All the apps that are waiting for an alarm will perform their update at once, to reduce power use.

Connecting to 3G after it's been completely turned off by the user uses even more power than waking it up from idle, so repeatedly turning it off and on by hand several times per hour will almost certainly use more power than what Android does automatically. The exception to this would be if you have one misbehaving app that actually is checking for an update every few seconds, but since Android makes it easier for app authors to use push notifications or to poll in an efficient way, this kind of bug is very rare.

Turning off 3g and reactivate it later would consume less power, as all the data can be fetched once the 3g radio is in the high power state 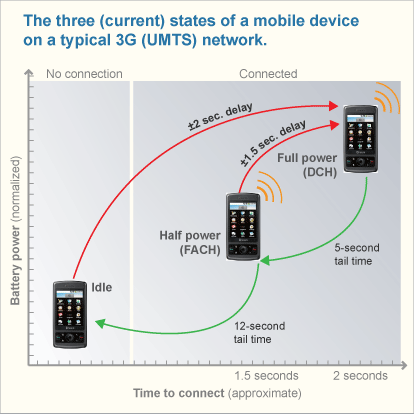 When it is left idle, even for the most trivial data transfers, like checking the weather, the same cycle has to be repeated. Because of the long tail time that holds the device in a power mode, transmitting data as a series of small data bursts takes much longer and requires much more battery power than it does to send a single bigger burst.

Not the answer you're looking for? Browse other questions tagged battery-life 3g push-notifications cloud or ask your own question.

27
How do push notifications work?