A few weeks ago, a new notification item appeared on my tray. It's worded in a way similar to normal update notifications, but it's not one of them, and it makes reference to software I haven't installed. See this image: 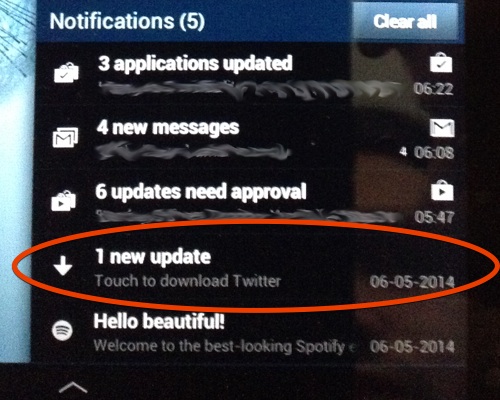 The screen grab shows two standard update notifications: "X applications updated" and "X updates need approval". However, there's also a different one that reads "1 new update - Touch to download Twitter". Not only this one is different, the really strange thing is that I DON'T have Twitter installed, so there should be anything to update.

Aside: I use a Twitter client, but it's called Tweet Lanes and it normally upgrades through the normal routes. This doesn't seem related.

My tablet is a 2011 Samsung Galaxy 10.1, running Android 4.0.4. Maybe the notification is generated by the OEM software provided by Samsung?

Is there a way to tell which programs are showing which notifications?

The notification appears to be coming from apps installed from the Firefox Marketplace on Firefox for Android.

These apps can be found by opening the menu in Firefox and going to Tools > Apps.

Not the answer you're looking for? Browse other questions tagged notifications or ask your own question.