How do I smite this unknown vampire process that is sucking the blood out of my battery?

I have a Samsung Galaxy S2 that I upgraded to 4.4 a couple of days ago. Since upgrading, my battery longevity has dropped a crazy amount. Just this morning, it took about four hours to go from full charge all the way down to about 25%, and that's without much use. Previous to upgrading, I could go for about two days while listening to podcasts and writing emails and general normal use.

I looked in the system settings under the battery usage, and discovered that some "unknown" process was responsible for 50% of my battery use: 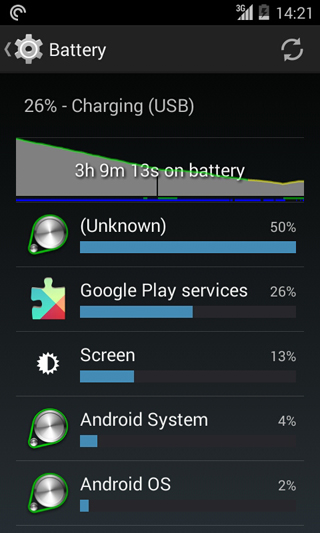 I clicked on the process to see if I could kill it, but the option to "force stop" was greyed out: 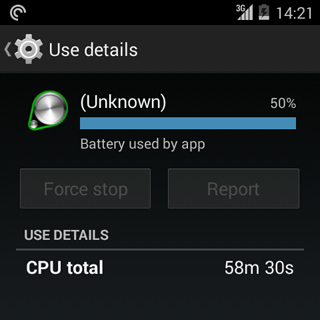 I tried rebooting, but, near as I can tell, it's still there, eating my battery.

How to I put a stake in the heart of this vampire process and make sure it never returns?

Yesterday, I woke up and my battery was dead, even though it was left in the charger for the night. Took a few rounds of trying to recharge and reboot to get any response, but eventually I got it running again, and this is what I saw in the battery settings: 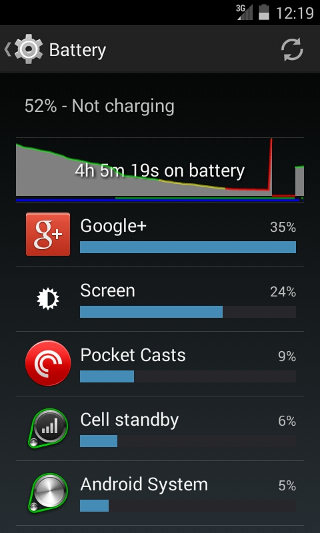 Looks kind of like Google+ threw a fit and sucked the life out of the battery. Though, actually, I think that's probably a misreporting of events.

Okay, so then, yesterday, I was listening to a podcast, and I hear a pop and then my phone reboots. Again, when it's back on, I check the battery report: 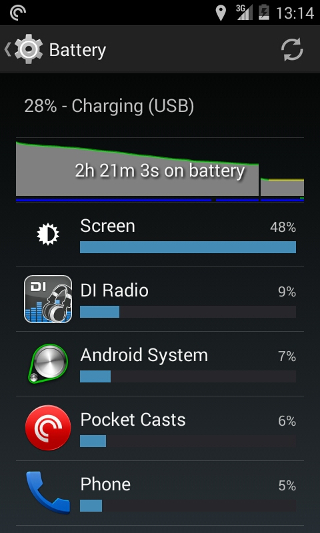 It's pretty normal for the screen to be the biggest battery draw, but I don't see why suddenly the available battery power droped by about half at the time the phone self-booted.

So... I don't really know what to make of any of this. I'm kind of thinking maybe my battery is dying and behaving oddly. But if anyone has any better ideas...?

If you are rooted, I would recommend downloading Better Battery Stats (or Wakelock Detector) from the Google Play Store, and finding the name of the 'mad' processes.

If you aren't rooted, I recommend you root as other apps can't access battery stats as of Android OS version 4.4.

It's understandable that your battery life will decrease when you run 4.4 on an older device like the S2. But that is strange. Try identifying the process like the other users suggested. I would also suggest Greenify, an app that can put processes and apps into automatic hibernation, decreasing their CPU toll.

Interesting! Never seen a phone that didn't list 'Screen' as biggest drain. I'd try uninstalling apps until it's fixed, my theory being that some cheesy app (spyware?) keeps calling home. Start with the running apps list--anything running that shouldn't be? Got GPS turned off? How much free storage do you have on the phone? If the phone's memory is nearly full it will overwork itself, in my experience, perhaps defragging. If none of that fixes it to your satisfaction then I'd wipe the phone clean and start over. Let us know what you find out!

That's very interesting. Have you looked for the "Unknown" app in your Application Manager? That may shed some light on the subject, if it can or can't be found anywhere in there. Other than that, look at some recently downloaded apps, see if they have any weird numbers in the App Manager.

Even without root you can run a shell for example with "Material Terminal" and run "top" e.g. running "top -m 10" you can see if there are any apps using a lot of CPU.

Not the answer you're looking for? Browse other questions tagged battery processes .

5
how to find application that is opening proccesses

8
My phone thinks it's charging
2
What is a canonical battery test that I can use before and after upgrading the OS version?
0
How do I determine exactly which process is draining my battery?
1
Calibrating/Correctly draining an Extended Battery
3
Battery drain issue on idle phone, how to find out the culprit?
1
Process "irq/288-wcd9xxx" draining battery, how to stop it?