How can I easily share links or text between my Android phone and my laptop?

For example, if I have a URL for an image from my laptop's browser that I want to share with a WhatsApp contact, what is the easiest way of doing this? The only way I can think of is to copy the URL, paste it into an email to myself, open the email, copy the URL and then paste it into WhatsApp.

Forget the pain of emailing stuff just to share some text. If you are running Android version 4.0 & above, check Keep from Google.

Keep works on your phone, tablet and computer. Everything you add syncs across all of your devices.

Add your notes/text/link/audio note/photo. Immediately this would be synced across your devices. You can access the same stuff in your android app.

For your specific example, just use Whatsapp on your laptop's browser: https://web.whatsapp.com/

Some time after asking this question I found the Pushbullet app, which shares clipboard items across devices. Since Pushbullet changed its business model, I moved on to using the Join app which has similar features to Pushbullet and, although not as polished as Pushbullet, is functional and meets my original requirements.

Update (Feb 2021): And some time again after finding Pushbullet, the service made a radical change to pricing, so I chose to find an alternative. I've been using Join (https://joaoapps.com/join/). It's not as polished as Pushbullet and it doesn't work in Firefox, but it still meets my needs and it's a one-time purchase. It also has some power user features that might appeal to SE users.

If you use Google Chrome, you can sync up your tabs so that when you open the chrome on either your laptop, phone or tablet, you will be able to see any tabs you have open on all of your devices relatively easily.

the trick is generating a QR-code using Duckduckgo´s tool. Then read it in phone via an app reader that uses your phone´s camera.

-in Chrome, i have added a search box shortcut named DU that searches in duckduckgo.com

-then i just type in the searchbox

tip: if you have the shortcut set up, then in the addressbox you just type DU QRwithout deleting the url in the tab

this also generates the qr code:

You might want to check out Airdroid, it supports posting directly to the devices clipboard. 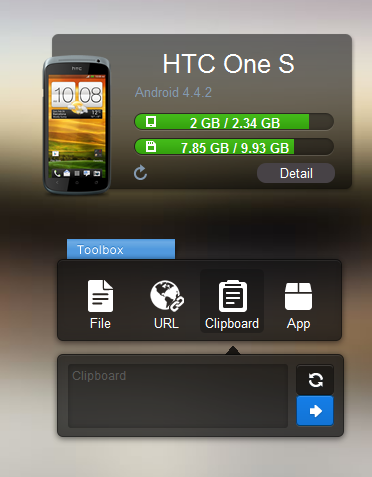 Another route, if you are on your computer and wanting to send something, is to see if there is an app/program on the computer you're using that would allow you to share the bit of information without involving your phone. I think there are a few apps/programs that allow you to communicate through what's app from your computer. Of course I mean at that point you could just send an email or even gchat.

I can think of two simple ways. 1. Download in to you pc and android one of the many notes app with auto sync between the devices. Just drop the link into a note and you'll get it inmediately on your phone, from there its a click away to whatsapp. 2. If you use chrome browser on both devices you can enable autosync of favs between them. So you add the site to your favs in one device and get it in the other.

Once you have them setup in both your Android and Linux distro, pair them. Go into your Android app. It would show the available clients on the wireless network. Send a pair request and accept it in your Linux distro. Change settings, if need be, on both sides.

From now on, your Linux distro and Android would sync clipboard whenever they get connected to a local wireless network.

Sharing clipboard is a breeze. You copy your item (link, text, etc.) in either Android or Linux distro and it would be available on the other side seamlessly.

It is possible to share information without login with yourself and others with Google Docs. When you create a doc, set the sharing option to "Anyone with the link can edit". Then anyone having a link to the document can make changes to it.

In your case, you first create a Google Doc as above (you will need to log in once to your Google account to do this), then share and bookmark it in any device you need.

If you are on a PC in which you don't have permission to install any software, one easy way to copy text from PC to Android (Maybe iPhone) without installing any software is to use the built-in Google Lens function. You can find Google Lens in the Google Assistant app. It provides an OCR function to recognize text in the camera images. And you can copy the text or directly open the link.

Easiest way is to have two Gmail addresses and cut and paste through Google Hangouts inside of Gmail.

You can create a list of links in a single URL.

You can use Scaan.in website. Just open the website http://www.scaan.in and read how to use it. It's the simplest and fastest way to share links from mobile to PC.

Note: I am the developer of this app. It is new to Play Store, but you can trust that this app is a final product, that has undergone thorough testing.

Not the answer you're looking for? Browse other questions tagged share-menu or ask your own question.

2
Can I send a link from my phone to my desktop?
1
What is an easy way to quickly transfer content (text, image, small files) between my galaxy note 10 and windows 10?

2
Change image size before sharing an image via email
9
How can I control a list of applications in “Share” pop up in Android built in browser?
17
How to share a Google+ public post outside of the Google+ app?
11
Is there any way to disable Direct Share on Android 6?
3
How can I share my bug report with Android devs?
0
Share option: How to append into text file?
1
Share to an automation app/webhook?