How to check if your bootloader is unlocked

I'm about to flash a custom recovery, but I'm not sure if my bootloader is unlocked or not (phone is rooted, but I did it a while ago, so I can't remember the process I went with), and I don't want to do anything that might risk losing all my current data. Can I simply run fastboot flash recovery [recovery image], and if it doesn't work, take that to mean my bootloader is locked? Are there any negative consequences to attempting this with a locked bootloader?

Often you can also run fastboot reboot-bootloader to get into the bootloader which often says right there on screen whether it's locked or not.

fastboot is located in %ANDROID_SDK_DIR%\platform-tools, where the part inside the %...%is where you installed the Android SDK.

Typically though it's not the bootloaders lock state that will result in failed roots. That is usually (depending on your method) due to the /system partition still being locked to read-only mode which has nothing to do with the bootloader IIRC.

An alternative method that may have mixed results:

You ought to see one of these:

i'm no expert, but if you go to the bootloader, by (on my nexus 4) holding volume down then power up, then it says 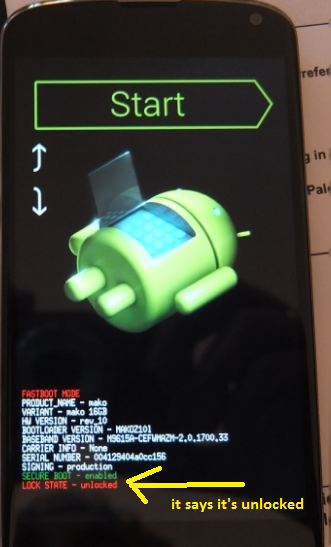 After scouring the net, I've learned this can be determined by entering your device's fastboot mode (from your device's boot menu selection, select AP Fastboot) and about four or five lines down from the top, you should see either Device is LOCKED or Device is UNLOCKED.

Unfortunately I only discovered this after attempting to flash the custom recovery while my bootloader was locked, which would subsequently put it into fastboot mode upon every boot attempt with the message "Fastboot reason: Flash failure". But I got around this by entering boot selection mode (holding vol down, up, and power simultaneously) and selecting "Normal Powerup" at the top. I unlocked my bootloader, flashed again, and am now happily running CyanogenMod 11. Hope this helps someone.

Not the answer you're looking for? Browse other questions tagged recovery-mode clockworkmod-recovery bootloader fastboot or ask your own question.