I have a wireless router (D-Link) in room A and a repeater (TP-Link WA750RE) in room B, both having the same SSID. Sometimes, when I go to room B and back into room A, my Nexus 5 (Android version 4.4.3) doesn't switch to the router although it has a stronger signal. It stays connected to the repeater instead. 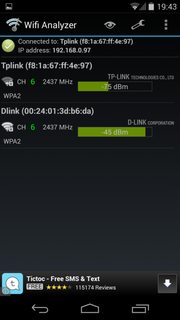 The "Tplink" and "Dlink" are only aliases. Both actually have the same SSID.

When I switch the Wi-Fi off and on again, it connects to the router. which provides much better speed.

How can I force Android to always switch to the strongest signal? Is there a setting for it, or an app?

Android 4.x will connect to the strongest available network when first connecting, but, by default, once connected, it will not change networks unless it loses its connection first. This is presumably because switching would involve disconnecting existing connections, and a second or three of no network.

Turning on "Avoid poor connections" in the Advanced Wi-Fi settings will make Android switch if the network reaches a low enough signal to trigger this feature, instead of waiting until it is gone completely.

One solution might be to set up a single SSID with two access points that support hand-off, rather than two entirely separate Wi-Fi networks - which is the way that this sort of scenario is handled in large commercial settings - but this depends on the hardware that you have.

Most Android devices removed the auto-switch feature for APs having the same SSID because it is an Apple patent.

I have successfully used Wifi Roaming Fix to switch APs that have the same SSID (using repeaters), use

When the signal level drops below a set threshold, it automatically switches to the one with the strongest signal.

I use both apps: Wi-Fi Manager (which can give priority to 5Ghz network over 2.4Ghz) and Wifi Roaming Fix (which can choose best AP signal once roaming).

My main router is a dual-band A/N while the repeater is only N. The setup is:

I test with the VoIP app and my mobile phone works smoothly all over the house without drop/reconnection.

Use WIFI Badger app instead of "Wifi Roaming Fix" for the same SSID with NetGear Orbi. Seems okay so far, although it would disconnect and reconnect when reaching a set dB from the router or satellite.

I found "Wifi Roaming Fix" disconnected for a longer period of time.

The solution I found is to match the security on both routers. The 816 has the option of automatic AES and TKIP, but I set it to manual AES. Both SSID names and passwords are same.

The settings page' screenshots are attached: 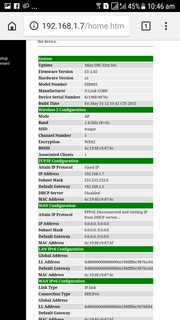 On Samsung Galaxy phones with the Samsung app "Routines" installed:

It worked flawlessly for me.

I seem to be having a similar but opposite problem with Fios, Orbi with 2 satellites, and an LG V10 phone. Orbi is set as an access point and everything has the same SSID. As soon as the signal strength falls even a little below -65, the LG drops out for 2 to 3 seconds and then finds its own way back to the strongest signal, which is usually the closest satellite. BUT this is just enough time to lose a phone call I'm in the middle of.

The Android app "Home Wifi Alert" provides good detail regarding signal strengths and a great deal more information about my network. Using this is how I was able to see exactly when/where the signal dropped and how totally sudden the drop is. I have found that if I "train" myself to race through the place where it drops, I'm likely to lose a few words but often can avoid dropping the call. Of course, this is less than an "ideal" solution :)

After carefully positioning the Orbi satellites using "Home Wifi Alert" as described above, I added SWIFI as recommended here. Since Orbi does allow for a Guest Network as well as the one SSID it creates, I added a Guest Network. Then SWIFI had two networks to switch between. With careful adjustment of SWIFI, I am now able to roam my house and SWIFI switches between the main Orbi SSID and the Guest SSID. Although I'm notified that a network has been disconnected, the other network has already been connected and I have not lost a call since.

SWIFI detects a weak Wi-Fi signal and automatically switches to a better network.

skyleskyle
1
1
Add a comment  |
Highly active question. Earn 10 reputation (not counting the association bonus) in order to answer this question. The reputation requirement helps protect this question from spam and non-answer activity.

Not the answer you're looking for? Browse other questions tagged wi-fi automation or ask your own question.

12
WiFi Signal drops out every 3 minutes
5
Android 4.4.2 on nexus 4/7, wifi connection loss
0
What could be the source of error for this kind of android wireless (wifi) disconnection?
1
Disconnect/reconnect to wifi with same SSID
0
Android phone connects to Airties only when phone or Airties is newly booted
13
Prefer 5GHz over 2.4Ghz without disabling 2.4Ghz