Android Nexus 5 knows password of WiFi he was never connected to!

I just bought a new Nexus 5 after using a Nexus 4 for about a year.

After turning it on and using it at work, I go home and as soon as I turn the WiFi on the phone it connects to my home network without having to insert any password.

I have never used it before at home and I did not insert the password on that phone. To verify I went to a friend of mine's place where I had used the old Nexus 4 and tried again and voila' the phone connects to the network again.

Does anybody know if it's an expected behaviour or does it sound strange to you as well?

What could be the reason? The only thing I could think of is that Google is storing details about the WiFi you connect to on your Google account. Can anybody confirm? Is this even legal?

Did you backup/restore your settings to/from Google? If so, that's why you can connect to these wireless networks. One of the things that gets backed up is the wireless network passwords so when you restored them back on your new device it is able to connect.

Android has built in backup functionality. It offers to backup settings (including wifi settings) automatically from each device. When you go through the set-up on a new device it then gives you the option to restore these settings. If you had this configured (I think it's enabled by default) then your wifi settings would have automatically been backed up on your Nexus 4 and restored to your Nexus 5.

To add to bmdixon's answer, go into Settings on your old Nexus 4 or current Nexus 5, select "Backup & reset" and have a look at the top option there: 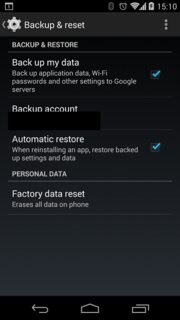 Back up my data
Back up application data, Wi-Fi passwords and other settings to Google servers

You can connect to your wifi even if it has password with the WPS(Wi-Fi Protected Setup). if WPS is currently pressed or on in your modem other device could connect to the network without using the password..

Not the answer you're looking for? Browse other questions tagged wi-fi 4.4-kitkat nexus-4 nexus-5 .

3
Why is one of my WiFi networks not visible after connecting to the other one?
2
WPA/WPA2 with my Nexus 7
2
Wifi auto rejoin issues on Nexus 5 / Android 4.4
29
Why does my Nexus 5 keep forgetting all wifi passwords after a reboot?
2
Phone forgetting networks after turning off wifi
3
Stay connected to WiFi that requires sign-in
2
Wifi connects for sometimes then disconnects and then never connects
0
Nexus 4, Lollipop 5.1 WiFi Issue
14
My phone stopped remembering wifi passwords!
0
samsung xcover 4, has no internet access while connected to a specific wifi network