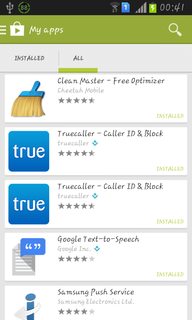 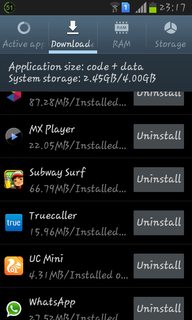 4
Under the All apps the true caller is shown twice by the play store / Under the settings there is only one app not two. (click images for larger variants)

In the above image the True Caller application is shown twice and both are of the same no extra app on(or plugin for that particular app). I have force closed the application ,later switched the device waited for some time and restarted the device and still the application duplicate is displayed under My apps.

There are not two apps as you can see in the downloads section.(The applications list is sorted name wise so there's no chance of missing a second true caller app)

The publisher of this app may have changed their package name when updating the app. Usually, apps have the same package name for its entire lifetime, which is how the phone knows to update a current app instead of installing a new one. If this is the case, you should uninstall the old app. The quickest (and easiest) fix is to uninstall both and reinstall the latest version. Provided the app's package name doesn't change again during the next update, this should solve your issue.

i encountered the same problem yesterday but then today when i checked google play to check the rankings of my app, the issue was sorted out. As the google is doing massive changes so i reckon it was a fault from google side.

i have read the above conversation and just for record to clear for others in desktop there is no such scenario of free and paid. it only occurs in cellphones :)

Not the answer you're looking for? Browse other questions tagged google-play-store bugs or ask your own question.

3
Why does Play Store update twice in a row the same app to the same version?
1
Apps I never installed appear in web store under "Other apps in my library"
6
Why would a free app be in the top grossing section?
1
Play store My App section
1
Is displaying invalid content a violation on the play store
9
How do I deal with unknown installation error code -505?
2
Why does Google Play Store show installed apps in the "Previously installed apps" section?
1
Why do Play Store apps show in Galaxy store?