On my Android 4.2.2 (Micromax Canvas A74), From System settings >Accessibility, there is option for enabling "Quick Reboot" as follows: 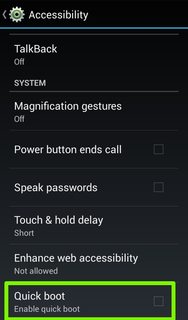 So How it differs from normal reboot? Or what enabling this exactly work?

I've never seen this option built-in, but there are several apps/widgets on the Playstore offering a "quick boot" as well. The term is a little misleading, as it's usually not a boot at all.

For some background information, let me first refer to my answer on Can somebody explain the boot process of an Android device?. Quick-reboot usually kills everything down to the "system server", so Zygote has to start it anew. As Zygote is the parent to all apps, basically the "Android-part" of the system is completely reloaded – while the underlying "Linux-part" keeps running.

From the users' point of view, this looks like a "quick reboot": the graphical interface (all apps, including the home screen) disappear, and then the system comes up again exactly like after a "boot". But during this process, the first 4 steps of a "real boot" (as outlined in the linked question) were skipped.

I'm not 100% sure if the "quick boot" option you are seeing there is the same, but it's pretty likely. Because, if it were a "full boot, just quicker" – then why shouldn't that be used in the first place?

This is a different quick boot compared to the other answers.

Qualcomm and MediaTek devices have this feature and it basically another name for Hibernation mode. When enabled, powering off the device hibernates instead of fully shutting down. (In turn making boot faster)

I have two Blu Phone, the Dash 5.0 with 4.4.2, and a 5.0 HD also 4.4.2. The build numbers are different though. The HD has the quick boot option. The Dash does not. Before I enabled the quick boot the boots times were the same about 35 secs. But now with it enabled, the HD boots in 14 seconds. So it does what it says and does not seem to work any differently after booting.

Not the answer you're looking for? Browse other questions tagged 4.2-jelly-bean reboot accessibility quick-settings or ask your own question.

24
Can somebody explain the boot process of an Android device?

1
BackupManager causing my phone to reboot
12
How to get the Enter (Return) key in Messaging (MMS) app - Jelly Bean
2
Mediaserver is eating my phone's battery?
1
How do I run network spoofer on S4?
12
No rotation lock icon in quick settings in Lollipop on Nexus 5
0
“Reject with message” disappeared from the incoming call screen on Samsung S2 Plus?
2
Enable software menu without virtual keys
0
Accessibility Services missing