I'm trying to install CyanogenMod on my Samsung Galaxy S3 (i9300, international). Had no problems, until I had to switch to the pc installer.

I'm stuck on the screenshot underneath: 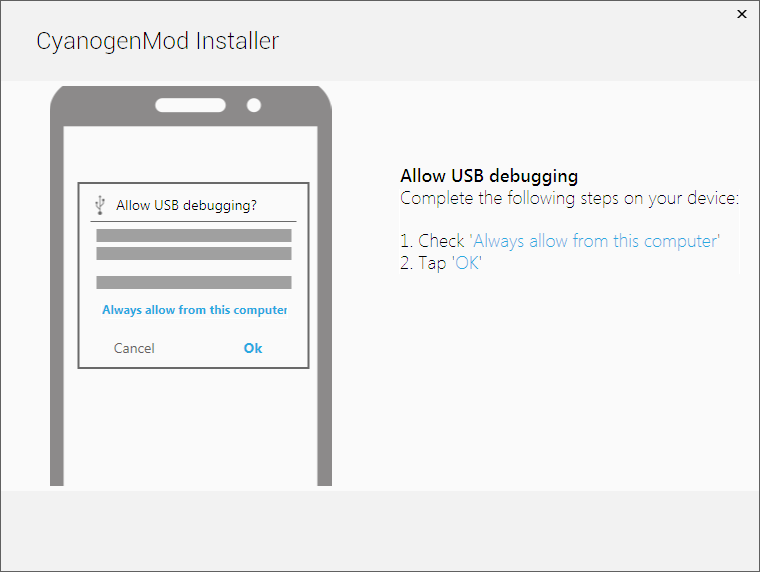 I have enabled USB debugging on my device (since the day I got it), did all the stuff asked up until now, but I can't continue here. It doesn't show any pop-up on the device, USB debugging is enabled.

Can anybody help me?

The solution to my problem was simply revoking all authorisations granted to computers already. After rebooting both my Galaxy S3 and my laptop, the pop-up appeared again and I could continue the installation of CyanogenMod, which has now succesfully completed.

I also got the same issue in my lenovo mobile. Initially I thought the issue is with my mobile.

But actually the issue is the adb don't have enough permission to read the rsa key to communicate with the device. When we run adb server it'll create a folder named .android(Linux - /home/--username--/.android, Windows - C:/Users/--username--/.android) in the home directory of the current user which contains the adb rsa key files used to communicate between the devices. When I check the folder is assigned with root permission(I am using Ubuntu 16.04 and I don't know how its assigned).

So I deleted the folder using below command. Use the particular method to delete the folder based on your operating system. Below I mentioned for linux.

Then restarted the adb server using below command.

Now It created the .android folder with the current user permission. Once done this I got the Allow USB debugging dialog.

Hope it help someone.

Not the answer you're looking for? Browse other questions tagged cyanogenmod samsung-galaxy-s-3 or ask your own question.

0
How To Install Latest Cyanogenmod From Clockworkmod Recovery - Galaxy Note GT-N7000 (Intl)
1
Cannot get MTP to work unless USB debugging is enabled
2
Chrome and Chrome Beta suddenly won't fill up the entire screen on launch
1
Ordered i9300 from eBay - need help to understand what's going on
0
Devices are not found when executing command (but "fastboot devices" finds them)
3
Almost certainly bricked device, looking for advice
0
Connect OnePlus One through adb keep disconnecting