How can I disable the low-battery sound in Cyanogenmod?

I have a rooted Samsung Galaxy S3 running Cyanogenmod 11 (20140804-SNAPSHOT-M9-i9300). When the battery hits ~15% or 5%, an alert appears with a warning sound. How can I disable this warning sound (without removing the popup alert)?

I've tried removing /system/media/audio/ui/LowBattery.ogg; this did not prevent an alert sound, but the sound did change, perhaps to a fallback. I also tried installing "Suppress Low Battery Sound" (aka "Disable Low Battery Beep" via the web browser), but this had no effect either. I tried installing Sound Manager, and turning the system sound down, but this also had no effect.

As per advice from Narayanan, I replaced /system/media/audio/ui/LowBattery.ogg with another .ogg file. The next time it was triggered, the new file played.

I then tried placing an empty file at /system/media/audio/ui/LowBattery.ogg, but this did not work.

Finally, I downloaded a slient .ogg from here, placing it at /system/media/audio/ui/LowBattery.ogg. This worked perfectly.

I see Sparhawk wants to disable the warning sound alone and not the popup. I stumbled on an xposed module which will disable both. I just keep this posted just in case if Sparhawk wants to slightly compromise on the requirement and also probably will help others who read this post.

Disable the Low Battery Alert with Xposed POSTED OCTOBER 13, 2013 AT 12:30 AM BY WILL VERDUZCODIFFICULTY:1

Disable the Low Battery Alert with Xposed There are plenty of Xposed modules out there. Their purposes range widely from adding previously device-specific functionality to patching bugs, and everything in between. This is, of course, all made possible by XDA Recognized Developer rovo89‘s fantastic Xposed Framework (thread) . The framework allows developers to create a module APK that is able to make a modification at runtime, while leaving original files intact. Both a boost in ease-of-use and user safety, Xposed makes device modification into a click and reboot affair.

A new Xposed module from XDA Senior Member defim has appeared, and its purpose is to remove that annoying low battery popup alert that you are given when running low on juice. Yes, being notified that your battery is running low is generally useful. However, for those of us who actively look at the battery meter in our status bars, it’s a bit redundant. Furthermore, if you happen to be in a call when you receive this alert, it will generally turn on your screen, thus reactivating the touch sensor. For yours truly, this has resulted in accidentally ended phone calls, unintentional muting, and more.

The module will work on any ICS+ device with Xposed Framework installed. Simply install the module, activate it, and reboot. To tame your low battery alert, head over to the module thread.

The exposed module is available in this XDA thread.

Update: I happen to notice that with GravityBox You get an option to disable sound alone. The screenshot of that option is as below: 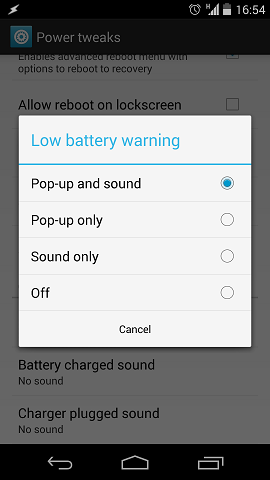 Well, I am not going to take credit of this answer, I just googled out the answer of this question.

PS: You need to be a rooted user to do that and yes removing the LowBattery.ogg try renaming and let me know about it !

Not the answer you're looking for? Browse other questions tagged cyanogenmod samsung-galaxy-s-3 audio alerts mute .

1
How can I turn off the "low battery" noise?