Google play store does not show all persmissions at app install

So recently, I was searching for a news app that needs few permissions as possible.

I found an app called Flipboard. Google play said I need to allow the following: 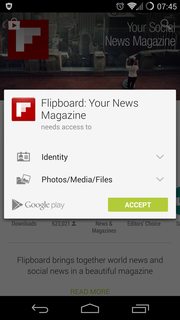 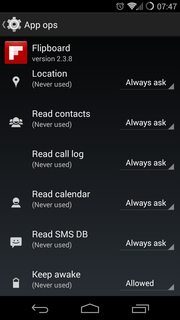 The permissions not only not match but there are additional that I would never allow, like reading my SMS or Read Calendar information.

Another strange thing is, that on the google play web page there is another set of permissions:

I know there can be additional permissions added with updates, but I never updated the app.

To me it seems google/apps are misleading users and it seems very illegal to me.

Am I missing something here or is my complain justified?

Yes, you are justified and they are being sneaky. Once a set of permissions is allowed, it can install new permission into that same set without getting approved on update. But you can retake control.

If your rooted, you can download the Xposed Framework installer from the XDA forums.

"Xposed is a framework for modules that can change the behavior of the system and apps without touching any APKs. All changes are done in the memory."

"This module aims to fix this problem for users who care about permissions.

It'll do the following:

1.Make the Play Store show you all of the app's permissions.

2.Require you to manually update apps with new permissions (regardless of the category)."

modules require Xposed framework to be installed to function properly.

As of now, the only way to view all permissions before downloading from the Play Store is with the PlayPermissions module. Photo was included to show module in use.

As far as legality issues, this is NOT the right forum. Get in touch with Google if you feel you have been wronged or your rights have been infringed upon

Not the answer you're looking for? Browse other questions tagged google-play-store permissions privacy cyanogenmod or ask your own question.

8
What does Skype use all those permissions for?
16
Help understanding Whatsapp's permissions
7
Why does Google Search suddenly need a lot more permissions?
2
Photos/Media/Files and Full Network Access
1
Android process needed for location
2
Restrict permissons when app is in background
0
Are device administrator permissions a security risk?
0
Can application see all WIFI SSID?
2
Can an app installed from the Google Playstore install another app with different permissions?