How do I enter a new line in a cell in Google Sheets?

When accessing a spreadsheet in Google Drive on a computer with a keyboard, I can enter a new line in a single cell by pressing alt+enter.

My keyboard on my Android doesn't even have an alt key.

How do I enter a new line on my Android device?

For a keyboard on my Android, I'm currently using Swype, but I am assuming, and hoping, there is some kind of general approach that is not specific to a particular keyboard.

Easiest way: add an extra letter at the end of the line. Select that letter. Hit enter. The letter will be replaced with a new line.

The function CHAR(10) will return a Line Feed.

Combining with functions like CONCATENATE() or & will give a new line. Example:

The only way that I found so far is through the clipboard.

Using a source document with a line break, with some effort you could succeed in selecting just the line break, and then copy/paste it.

Even easier is to use an app such as "Unicode Pad" or "Unicode CharMap", both of which will find and then copy/paste any character. You'll need to look for LF, LINE FEED or U+000A.
Note that you won't "see" the character after you select it, it shows as a space for obvious reasons.
This still isn't as convenient as I would like it to be, but at least I found it to work reliably.

The highlight a throw-away character and hit enter trick, as well as the type everything into a text editor, then copy/paste it into the Google Sheets cell, both only work on Android devices. I have a Google Spreadsheet that I'm sharing with a client who has an iPhone, and she needs to be able to enter multiple lines within a cell. So I came up with just a little Google Apps Script code to do it on her iPhone (can be entered into the drop-down menu of the Google Spreadsheet, Tools >> Script editor):

Basically, that creates a function (that is automatically linked to a Google Sheets trigger), and will run every time a cell is edited. It simply replaces all of the "\n" characters in your text with a line-break. Make sure that's a backslash, and not a normal slash. For programmers, the "\n" is a special character that represents a carriage return within a string. The only possible exception where an accidental line-break might happen would be when trying to input a Windows path into a cell such as "C:\Users\John\Documents\news". So double-backslashes is the common workaround for Windows paths among programmers. So one could enter "C:\Users\John\Documents\news" or even just simply "C:\Users\John\Documents\news" (since \n is really the only string we're replacing at this point).

It's also possible to change the replacement characters, in case anyone is more familiar with HTML:

Since "<br>" is much more deliberate (people don't accidentally type that in unless they want a line-break), it makes for a simpler replace function, since we don't have to do an escape for double-backslashes. But personally, typing in the angled brackets from an Android touchscreen keyboard are a bit inconvenient to do so twice for every line-break...

Mark the cell in which you want to have new lines.

At the top menu click the "A" next to the redo button. 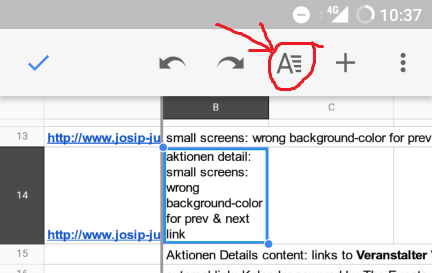 in the lower screen section a modal pops up. There hit the tab "CELL". 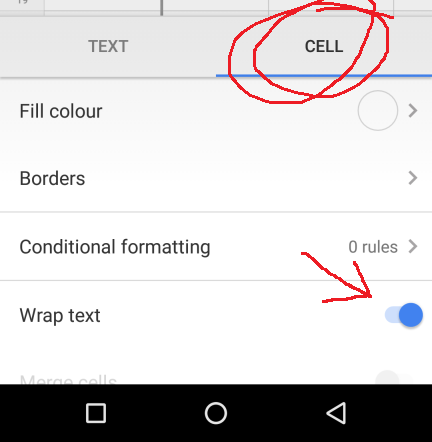 Now this cell will do line-breaks on long text.

The following trick worked for me: Ctrl + Enter

I have succeeded by pressing several times Enter when typing a message, select all, copy it and paste it into a cell in a sheet.

Just select a line and press + (top right on the tool bar), you'll be offered to insert a row above or below or a link.

4
How to add new rows on a Google Docs spreadsheet?
1
Google Sheets Android - Continuing Formulas
1
How do you select a large number of rows in Google Sheets without endless scrolling downward after selecting the first row?
1
Samsung - Update to Android 10 Changed Keyboard Layout
0
In Android Google Sheets, "enter key" (->|) won't move to cell below. How to fix?
2
Open keyboard in Android recovery mode