I have been unable to figure this out. I have seen multiple instructions online but none of them describe what I see on my phone. I am running the latest KitKat and Hangouts and I want to create a new SMS and add multiple recipients from my address book.

I start by typing a name, for example "Bob", and then choose Bobs number from the list that pops up as I'm typing. It then jumps to the current SMS conversation I am having with Bob. There is literally no where for me add another person to send the text to. I don't seem to be able to start a fresh SMS conversation with multiple people.

So basically how can I send a text message to several people?

EDITED: Added some screen grabs below to show y'all what I'm seeing. Yellow marks are me tapping that area and the next image is what happens after the tap. 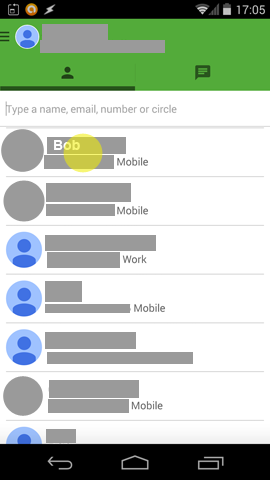 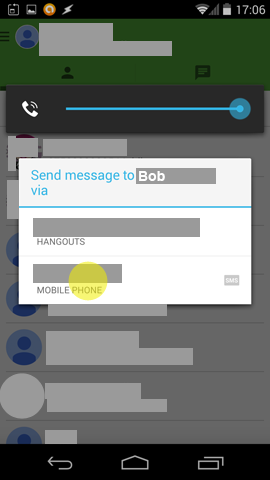 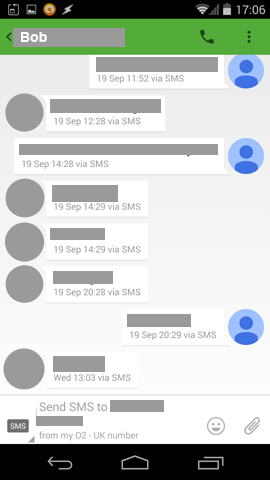 According to Google, this functionality is no longer available unless you enable group MMS. Unfortunately, MMSs are much more expensive for me and aren't displayed correctly on some older feature phones.

Once again, Google doesn't care about non-Google communication protocols, possibly in an attempt to force people onto Google products or out of sheer ignorance. They did the same with the mail client in Kitkat which is unusable to me because of severe IMAP bugs, so I switched to K9. Seems like I have to find an alternative SMS app as well.

Edit: Google now offers an SMS app called Messenger (yeah, like the Facebook app) that supports group SMS. It looks similar to Textra which I used before, but now this is my default SMS app.

Edit: This feature has been reintroduced in Hangouts version 3.

I just looked at my version of Hangouts. It's not the exact same situation as you, as I'm running CM 11S on my OnePlus, but I am running hangouts 2.3 so it should be the same.

There have been situations where the option to add members to a group MMS has not shown up. I'd try adding an individual both ways I mentioned. Let me know how your device is behaving and I'll try to help further.

Not the answer you're looking for? Browse other questions tagged sms 4.4-kitkat nexus-5 google-hangouts or ask your own question.

0
Hangouts SMS not showing emoticons
0
Can hangouts send text-only MMS to certain contacts?
0
Hello SMS - how can I directly jump to an existing conversation?
0
Can I send a mass text in Hangouts?
4
US: sending international SMS, Hangouts
0
SMS group text alerts
0
Opening google hangouts or another voip based sms app from browser links