Can I use my Galaxy S+ (or S4) in the shower safely without electrocuting myself or damaging the device?

I just had this tweet pop up on my feed (Translation: "True or False? In Japan, 90% of the mobile phones are waterproof". Reason why? Women use them in the shower!"): 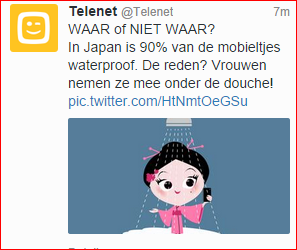 Please ignore the racist image in there.

this got me thinking: Is the Galaxy S+ safe enough to use in the shower? if not the S+, what about the S4 (not the active variant)? Or are both of these claims by Telenet just a legend?

No, the phones you mention are not IP rated and thus not safe to use in the shower or anywhere else they might get wet. They won't electrocute you, because they operate at low voltages, but it will probably cause irreparable damage to the phone.

They're also not Japanese phones, so this has very little to do with the tweet you saw. Samsung is a Korean company, and Android penetration is actually pretty poor in Japan. The Japanese phone market is dominated by flip phones, and touchscreens haven't caught on very well - perhaps for the reason they suggest.

(To avoid confusion, the "IP rating" mentioned above is nothing to do with networking. It's the name of a rating system for electrical devices' resistance to environmental factors like water, dust, and impacts.)