We changed our privacy policy. Read more.
This site is currently in read-only mode; we'll return with full functionality soon. Follow @StackStatus or visit our status blog for more info.

ROM flashing using Odin on Galaxy S4 interrupted. Odin is still running. Is there anything I can do?

I was re-flashing the firmware on a Samsung Galaxy S4 using Odin, and the USB cable was bumped, which made the update fail. I reconnected and attempted to flash again by clicking the Start button. It seemed to be progressing, but Odin's blue progress bar continued from where it had stopped instead of starting from the beginning. After a while I got the following warning message from Odin, in red text and repeated 19 times:

followed by this at the end:

I attempted to start the process again (by clicking Start in the Odin desktop app), but it failed multiple times. I also tried clicking Reset and starting again. It doesn't seem to be possible to do anything from within Odin on the phone. It doesn't respond to any buttons and doesn't react in any way when I try to start the process again from the computer (no more messages on the screen, and no movement in the progress bar, or anywhere else). This doesn't necessarily mean it's frozen, though, because I don't believe it's intended to be interactive. The blue progress bar on the phone is all the way to the end, where it has been since my second attempt to flash.

I have not restarted the phone, because I am afraid that if I do that after an incomplete flash, I will not be able to get back into Odin. It is still on, still in Odin, still showing all the errors. The desktop Odin app on the computer can detect when the phone is connected and removed (I get the "Added!" and "Removed!" messages).

Am I correct in my concern that I'm likely to brick the phone if I attempt to restart without flashing successfully? Is there anything I can do to restart the process? It would be an astounding design flaw if Odin really isn't capable of restarting a failed flash to allow for recovery if the process fails and the device has not yet been restarted and Odin is still in RAM.

I know for a fact that the ROM file I'm using is valid and that I'm doing this correctly, because I have gone through this process several times and never encountered a problem until this time when the connection was interrupted. I have no support available from either Samsung or the carrier (Verizon), because I bought this phone used on eBay specifically for experimenting with things like custom recoveries and ROM flashing.

FWIW, here's a screen shot of the Odin desktop app as it is now: 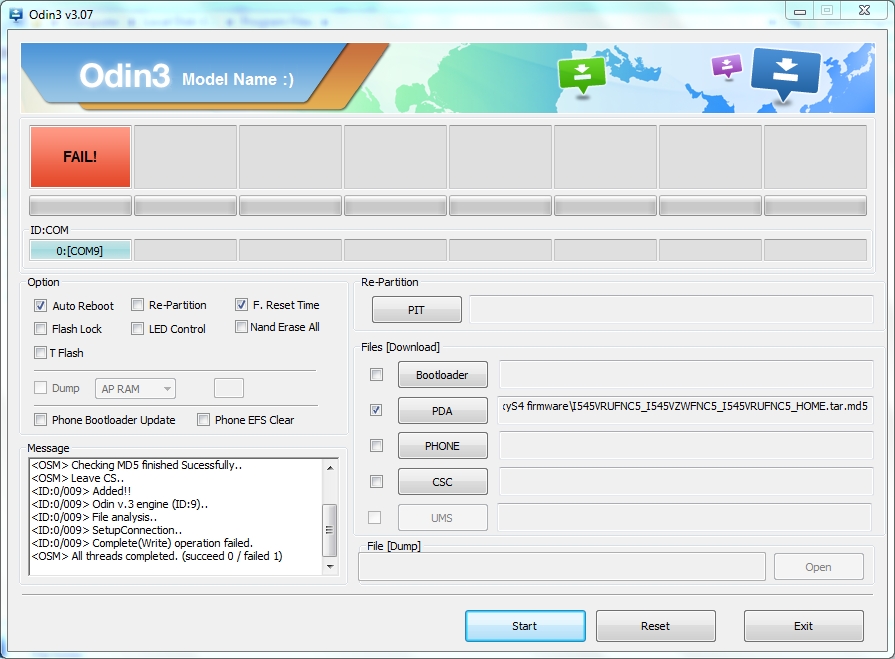 After waiting a couple of days and not finding any answers, I restarted the device. It booted to a screen saying 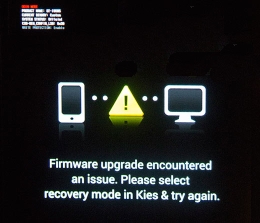 I tried using recovery mode in Kies, but Kies gave me an error message saying that the device is not supported. However, I noticed that the text in the upper left corner of the screen indicated that the phone was in Odin mode (showing the above message instead of the usual Downloading...do not turn off target!!!). So, I launched the Odin desktop app and tried flashing the firmware again, and that worked.

Basically, I was lucky. In some cases if a ROM flash fails, you can't get back into Odin mode. So, I'm posting this in case it helps someone, but I'm not going to mark this as the accepted answer, because I'd like to see if anyone has a solution that avoids taking the risk of restarting and hoping for the best.

As far as I understood your flash process interrupted and normally you are afraid to restart the device but the key point in here is you dont change "download mode" with flash process. Dont be afraid.

Feel free to close the device and reopen download mode with Volume Down + Home + Power, Use ODIN properly this time.

This site is temporarily in read only mode and not accepting new answers.

Not the answer you're looking for? Browse other questions tagged samsung-galaxy-s rom-flashing odin .

5
Odin. Unplugged target while flashing
2
Do I have to do anything different when flashing a ROM with Odin if I'm coming from CM7?
0
Flashing Cyanogenmod9 - Kernel via Odin
1
Samsung Galaxy S I900 Bootloop in Recovery after flashing custom ROM
2
Does Odin wipe system image when flashing a new Rom?
4
ADB command to wipe data the phone?
2
Encryption Unsuccessful even after system backup restore
0
Flashing galaxy s5 issues