I realise this is asked countless times but I genuinely believe my question is unique, please bare with me as I explain.

My Nexus7 (2013) is not working in fastboot mode, I connect my Nexus 7 and run the following:

The Nexus 7 appears (once authorising adb), so I then reboot to fastboot (or bootloader):

The Nexus 7 reboots into fastboot correctly and I see the usual screen: 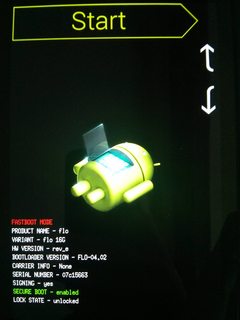 However, when I issue any fastboot commands it cannot see the device:

to add to this weirdness, once it's booted up properly the Nexus 7 appears as a Nexus 4 in lsusb:

I'm so confused, what have I done to my poor Nexus 7?? Please Help!

Also, it seems from your fastboot screen information your Nexus is fairly custom at this point (product name usually reads grouper, the device codename, yours seems to call itself FLO?). This may affect what drivers are required, but I am not an expert in driver compatibility. Perhaps, due to the ambiguity of what can be flashed to the fully unlocked Nexus line, you may actually have pushed Nexus 4 firmware to your device, and due to the fact that they differ only in size, it may appear to you to still be running the software for the 7.

It appears your device has, in the fastboot information, a slot for reading to the user what carrier the device is currently subscribed to. This should, to the best of my knowledge, only appear on the Nexus 4, or the GSM capable 3G enabled version of the Grouper (Nexus 7). It can be very easy to push the files for your phone to your tablet accidentally, and might be worth consideration.

If you have a WiFi only device, this is likely the issue. A quick way to discern if you have the Nexus 4 software on your Nexus 7 is to run an application that has a user interface which is programmed to change from the phone to the tablet (a list of such apps should be easily found with a Google query. I believe Gmail is one, but that may be blurry for us with the Nexus 7 because it is considered a "Phablet", a hybrid style device).

I recommend trying to erase all Android drivers on the host computer, and reinstalling the specific drivers for the Nexus 7 only, then after hopefully solving the issue, redownload the other necessary drivers for other devices, only after this issue has been resolved.

If that is not helpful, I would consider a full overhaul of your system through pushing a Google supplied system image through adb, and using recovery partition to erase everything and reinstall stock flavor of this device. It may also be possible fully through adb, since you say it is detected when using that utility. Hope this helps you somehow :]

To sum it up, you either have interfering drivers, or have given your device its cousin software from your phone, a very small difference in terms of observable functionality assumably, but large for accessing the fastboot function.

I had the same problem, but it turned out that adb didn't have to see the device in order for fastboot to see it.

I'm guessing you want to flash Android 5.0 to your Nexus 7?

I just did that by following these instructions. An extra thing I had to do was adding a udev rule, as described here. (However, I removed the GROUP ="plugdev" part of the rule, since other sources omitted that.)

I experienced the same thing and I found that it was because the USB ID was different in fastboot mode.

The answer by poolie to the question Android fastboot waiting for devices helped me solve my issue on Fedora 22.

Rather than restarting the udev service, I issued the command:

Not the answer you're looking for? Browse other questions tagged usb nexus-7 fastboot or ask your own question.

1
Nexus One can boot only with USB fastboot
16
What's the name of the protocol that android devices use in debug mode?
1
Nexus 10 / Android 5: recovery broken, fastboot not working
0
Nexus 7 2013 USB connection failed
1
Pixel 4a : adb detects device but fastboot command doesn't work