Is there a way to stop android from creating folders on the SD card such as "Android" and "Download". I have Android KitKat version 4.4.2.

It is an obnoxious programming practice prevalent in Android and it's apps, alright.

/system/etc/permissions/platform.xml can be used to NOT give permission to everyone, their grandmothers and their cats to poop folders and files left and right everywhere throughout your SD card, but is not the final solution... just a way to make it less bad.

If not, remember that Android runs on Linux and you can always use the rules of Linux against it... or the rules of the filesystem for instance... If the SD card has a FAT32 filesystem there cannot be folders and files with the same name... so... by creating files named "LOST.DIR", "ReceivedFiles", "Download" and so forth ensures no other folders will be created... lastly is just a matter of setting the proerties of those same files to "hidden" and the file manager to "not show hidden files/folders"...

They will still be there doing their function but just not so visually.

Ultimately it is up to the person who writes each app to store app related data in the /data partition instead of the SD card as it was intended to be.

If you have Kitkat or upper, then this should work:

On my Phone (Galaxy S3 mini) I found the option Protect SD card/ usb Storage in the Developer Options. Always when it's tagged there gets no "Android" folder created. After a small internet recherche I found out more about that feature and stumbled over these articles: 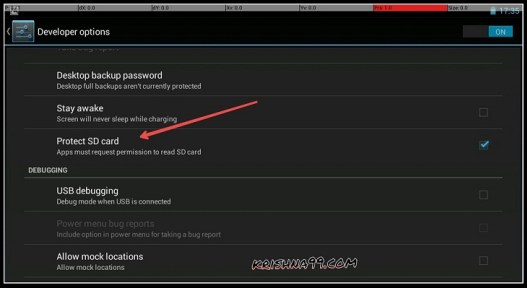 According to the Android API Doc every Kitkat phone with Android 4.1 and above should be able for that:

"Provides protected read access to external storage. In Android 4.1 by default all applications still have read access. This will be changed...."

But as I said these is only for the the "Android" folder. To prevent save and reading all kind of media files you need the ".nomedia"-file. For "Downloads" you have to change the download-path in the Browser. The "LOST.DIR" has already and answer! And for the rest of all ----> ¯\_(ツ)_/¯ Find out by yourself!!!

Not the answer you're looking for? Browse other questions tagged 4.4-kitkat sd-card or ask your own question.

9
How to prevent Android from creating LOST.DIR on SD card?
7
How to stop apps writing to “Android” folder on the SD card?
-1
Can I disable an Android app to read write some folders in SD card? (CLOSED)
0
How to prevent extra folders from being created in my external SD card?

12
List of special Android SD card folders?
5
Creating and handling an encrypted folder on sd-card for unrooted devices
1
Android sd card default folders purpose
0
How to prevent extra folders from being created in my external SD card?
0
Is there a way to stop android from creating folders on the SD card such as “Android” and “Download”. I have Android version 8
3
How to prevent Android from creating Android and Lost.dir folders on external otg storage?