How to set personal interval to check data usage?

On my Nexus 4 with stock Lollipop, I can check the usage data month by month, but my subscription is every 30 days (around the 15th).

New contracts last 28 days, so there is more difference between real interval and a month.

Is it possible to set a personal interval (the start and the during) to check it?

Unfortunately I don't have enough reputation in this sub-stackexchange, so I will answer instead of commenting.

This options is not available in Android (up to this date), but there is an issue (which you can star*), which has unfortunately been marked obsolete with no reason whatsoever. Maybe it can be rediscovered if enough people star it.

P.s.: Here is a similar issue which has not been marked obsolete (yet).

Edit: Another trick (which does not really give you the desired effect) might be to use an app from your provider (these often show you how much data you have left).

*Makes it more likely that it might be implemented at some point.

Go to data usage in setting, and click the drop-down that says some interval (5 Dec-4 Nov etc) and choose "Change cycle..." to change the start date.

I found the "Change cycle" option today. It's at the bottom of the drop-down 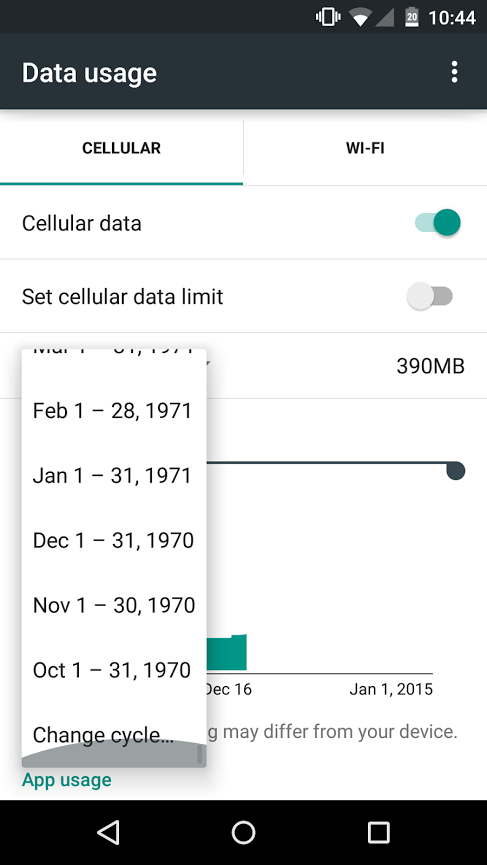 Not the answer you're looking for? Browse other questions tagged settings data-monitoring or ask your own question.

4
Why has my Samsung Galaxy S2 become a data hog?
3
Android data usage shows significant usage even without SIM card
28
How can I change the data usage cycle for Mobile data?
3
Huge unexplained data transfer - investigating
2
How to set data usage cycle to non-monthly value?
3
Warning bar in "Settings - Data usage" disappeared. A bug?
8
How to clear the data usage?