APN setting is missing on Nexus 5 bought from US

I have an unlocked Nexus 5 handset bought from Google in the USA. I just wiped it and installed Android 5.0 on it. However, the UI to edit the APN settings does not appear. By that, I don't mean that the APN info is gone, I mean that the actual UI to view/edit APNs is missing.

If I go to Settings -> More -> Cellular Networks, I see only the 3 settings shown in the picture below: Data roaming, Preferred network type, and System select. This meant there was no way to get the phone working with my SIM card using only the stock Android installation.

Now, I was able to get on Wi-Fi, download the app Tweakker APN INTERNET MMS (removed from Play Store), configure the APN settings using that app, turn off the Wi-Fi, and confirm that I was online via the SIM card, using LTE. So the phone is working. But the APN view/edit UI is still missing from the Settings app, even after adding and activating the OCN MOBILE ONE data-only Japanese SIM card I have.

I googled the hell out of this in the morning, and there is every indication that there are supposed to be APN editing controls at the bottom of that "Cellular network settings" panel in Settings. But there are not.

The only weird/unusual thing here is that I am using a US phone in Japan. I bought the OCN MOBILE ONE data-only SIM card from Amazon here. It seems unlikely, but I suppose there might be weird country-specific telecom regulations that for some reason make Android hide these controls on an unlocked foreign-model phone?

EDIT: I should have mentioned: this occurs with or without the (NTT DoCoMo) OCN MOBILE ONE SIM card in the phone. I even re-wiped the phone and re-installed with the SIM card removed to make sure. 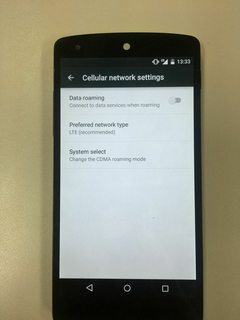 It seems the problem is related to GSM/CDMA network. As you bought the phone in US which uses CDMA networks, I kind of believe that the default setting is to use LTE/CDMA network.

You can change the preferred network type by:

If your device is rooted, you can use ADB to open APN setting.

Not the answer you're looking for? Browse other questions tagged settings apn or ask your own question.

2
How do I find APN settings to use with a 3rd party SMS app?