How to close all background apps at once in Android 5.0 (lollipop)?

I noticed that I can press the square button on the bottom right to show all background apps, and then swipe from left to right with my finger to stop them manually.

But sometimes, I find that I have twenty or more apps in the background, so I want to stop them all at once.

I did a simple search on Google, but didn't find an answer.

Is it possible to do that?

Closing all background apps is a bad practice. You should close apps that you don't use often or apps you specifically want to close for X reason. IMO, the only good reason to close all recent apps is that you feel like there are too many of them and you can't find an app any more because of the mess it creates.

The recent apps feature in Lollipop appears to behave differently from previous versions. First of all, as you noticed, the button to clear all recent apps is gone. Moreover, the recent apps persist through reboot (read on Android Police : The Recent Apps List Now Persists Through Reboot).

Now, you still can clear them by swiping all the cards, which I agree is tedious. But as the top comment on the AP post I quoted above explains :

Clearing out all of the apps in recents just puts more work on CPU and thus your battery because you're essentially having to start from scratch the next time you load it. If something stays in your recents list and is in RAM, it loads instantly with virtually no battery or processing penalty minus refreshing the content via the network connection.

Basically, all the Android users (including me a while ago) who frequently clear their recent apps, use task killers, etc. are using their Android device the wrong way.

You can read more about Why you shouldn't use a task killer on Android (a post by cybervibin on XDA), which is roughly the same as killing the apps yourself. In short, unused RAM is useless RAM. If a large amount of RAM is required by an app, the system will stop recent apps by itself to provide the newly launched app the needed resources. No need to stop them yourself, it's the OS's job.

I also recommend the read of this question on Android Enthusiasts about What happens when you swipe an app out of the recent apps list.

To conclude, to this day and as far as I know, you can't clear your recent apps all at once on Android Lollipop 5.0. But you shouldn't have to do that anyway, which is surely why Google's teams removed the button.

It seems that this CyanogenMod 12 only option, as Andrew T. states he does not have this option in stock Android Lollipop, but I have a little button to clear them all. 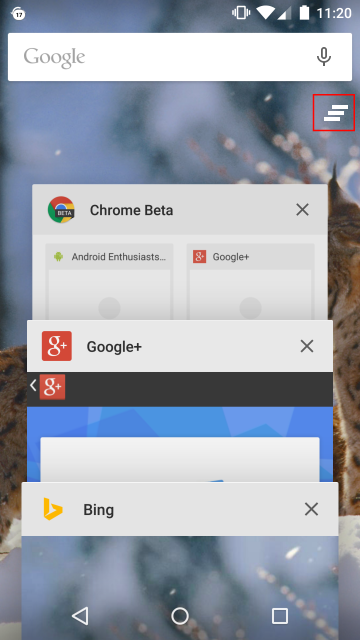 When you double tap the Home button again you will now see an 'X' button to close all recent apps that are open.

This answer was suggested as an anonymous edit:

In the task manager settings, change the view from "cards" to "grid". The close all button remains at the top, as it used to.

Not the answer you're looking for? Browse other questions tagged 5.0-lollipop recent-apps-list .

149
What actually happens when you swipe an app out of the recent apps list?
2
Gallery app disappeared
4
Two-finger swipe 'breaks' heads-up notifications on Lollipop?
1
How to disable the Lollipop notification popups while in a game?
0
Lollipop - Apps not autostarting
1
What package is responsible for the "Recents" button to work?