Phone kept awake for half an hour after arriving home

My Moto X (2014) running Lollipop 5.0.1 sometimes starts chewing through battery upon arriving home after being away (or, possibly, getting back on a wi-fi connection is the trigger?). It does this for 30-45 minutes or so, then returns back to normal. The battery usage looks like this: 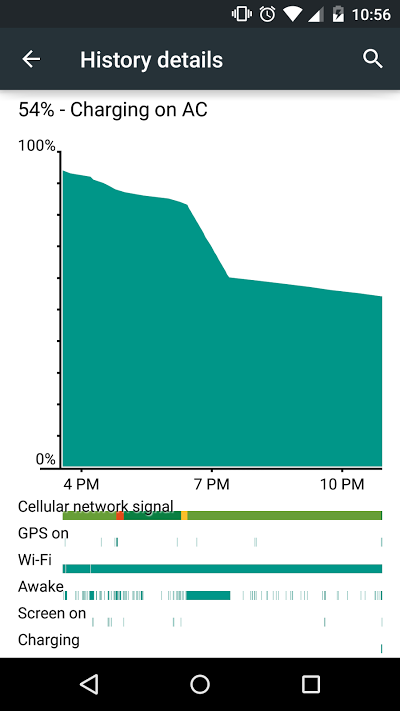 The high battery usage looks to correspond to the device being kept awake, unsurprisingly. Looking through the top battery users, I see 'keep awake' times of around 25 minutes for Google Play Services, Android System, and Google Search; I'm guessing the latter is the root cause.

I am running Google Now launcher.

I hardly touched the phone during the time it was chewing through battery, so I don't think it's anything I'm causing explicitly.

Any ideas what might be going on, or how to diagnose further?

The problem is broader than originally reported. Sometimes when CPU usage peaks, it returns to normal after 30-60 minutes. Other times, it seems to continue indefinitely, and I restart the phone, which temporarily resolves it.

I no longer thing arriving at home has anything to do with it. It seems to happen more in the early evening, but sometimes would happen overnight.

Quite a few things stop working when the problem happens:

In short, the phone is simply broken.

I finally contacted Motorola support, who quickly suggested replacing the phone, so I took them up on that. The new phone experienced the same symptoms today.

The new phone went several days without problems, and the first problem happened after I made some changes to Google account sync settings. If memory serves, I turned on Inbox, Ingress, and My Tracks syncing. I've now tried turning those off again and am waiting to see if the problem continues to happen.

When the problem happens, it correlates to continuous high CPU usage by the Android System process.

For what it's worth, I don't see this problem on my Nexus 7, also on Lollipop, with very similar configuration.

Because the problem is only happening at your house it is mostly likely something using your GPS. Do you have moto assist turned on for when your at home? If you do I would suggest turning it off and seeing if the battery is still being drained. If that isn't the cause try turning off your location services and see if that fixes it. If that fixes it you can look at which apps use the location service through the Google settings app - > location. It also tells you their effect on battery. Finally if none of the above work then disable Google now by going into the Google now->settings-> slide the Google now option and disable location history. You could also try another launcher like nova launcher: https://play.google.com/store/apps/details?id=com.teslacoilsw.launcher

Do you have the option on to only download updates when connected to wifi? Perhaps when you arrive home it starts updating your apps (though 30 mins every day sounds a bit long for this)

Eventually, more through luck than anything, I discovered that this problem stopped happening after disabling 'Ingress', 'Inbox' and 'My Tracks' syncing in my Google account. I.e., under:

Probably only one of these is the cause of the issue, but I don't want to risk bringing it back by experimenting further. I note that Ingress syncing is back on now, presumably because I have used the app, so it's probably not to blame. I think I've had Inbox syncing on without the problem occurring, so if I had to guess, My Tracks syncing is the culprit.

I haven't had the problem in more than a week now, whereas I previously saw it around twice a day.

Not the answer you're looking for? Browse other questions tagged battery-life 5.0-lollipop moto-x wakelock .

7
Is it normal for Android System to be the top battery user?
6
Is there anything that can show exactly what has awaken my phone?
2
What is preventing my Android phone from going to sleep? It is eating through the battery quickly
22
How can I find out what causes "Android OS" to consume battery?
19
Mediaserver using excessive CPU time and battery
5
Google Search App Draining Battery on KitKat
1
Get battery usage data at finer resolution