I want to use Spotify and a running speed tracker app at the same time, but Spotify is much louder than the other app and so I cannot hear it when both running simultaneously. Is there a way I can turn the volume down on one app but not the other, similar to volume mixer in Windows? 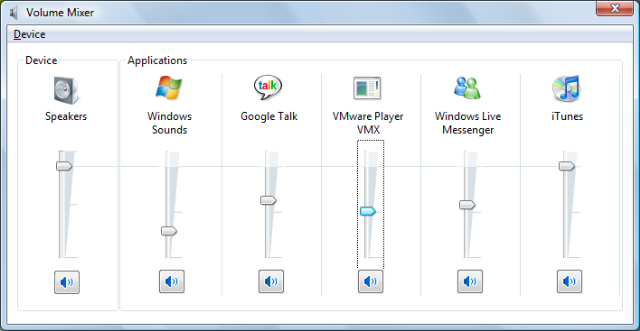 Probably you were looking for something like Sound Assistant version, for generic Android devices, but as it stands now the former is available and its only functional on Samsung devices (Galaxy editions running latest versions of Android) 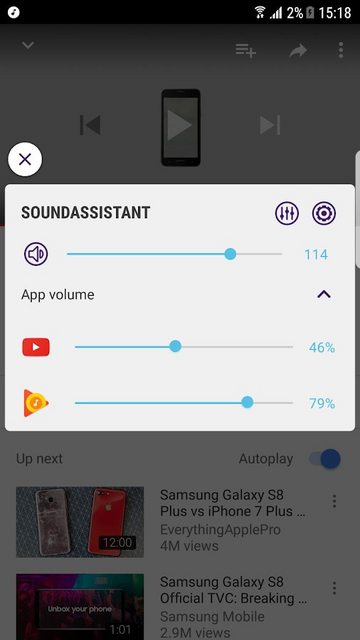 Unfortunately as it stands it is not possible or at least feasable for other android devices, perhaps this feature will need some hardware upgrade on target devices to stream audio output on more than 1 channel, just as Izzy commented in his answer.

You may have to wait a little while until such a feature can be impelemented in other android devices, meanwhile you could get a supported Samsung device to enjoy this feature or perhaps automation with tasker or macrodroid.

That kind of "Mixer" doesn't seem to be possible. Quoting from the description of App Volume (thanks to Fiksdal for pointing to this comment):

Android manages one stream for all apps, so we can't set different volume levels at same time for two different apps.

So at the very best, you could set different volumes for different apps. Again, there's nothing built-in to Android to automate that, so all solutions are app-based:

A mixer could be possible in a limited way if you could tell the involved apps to use different "channels" (e.g. one using the ringer, one multimedia, one notifications, one alarms) – which might be possible for a root app (with some XPosed module being the most likely candidate). But so far, it seems nobody came up with such.

I don't know about any more up-to-date candidate or other alternative, though some might have slipped through my nets. Be welcome to check my app-list for System Settings: if I happen to find one, it will certainly be added there.

Over 4 years ago, Izzy wrote an answer stating that this desirable feature likely was not possible in most Android builds at that time.

Well, fast-forward 4 and a half years, and it appears that it still is not possible in most Android builds.

Quoting from Yogesh Dama, a skilled Android developer, in the current release notes for their app WOW Volume Manager:

Note: app can change volume levels only if you open the app which you configured. there is no possibility in android to change volume levels for background running apps. only apps those are on foreground and open by user, only for those app automate volume control can work.

The key words in that quote are "there is no possibility in android to change volume levels for background running apps". When you have one app in the foreground, all other apps are in the background, and Android still provides no way to control the sound volume of background apps.

There are ways around this Android limitation: App developers can include different sound clips pre-recorded at different volume levels with their apps. They can also dynamically generate sounds at different amplitudes. Finally, they can allow selecting frequencies that humans perceive to be at lower volumes. After implementing one or more of these techniques, the devs can then can allow users to select a volume profile for their specific app, which will work even when it runs in the background. I don't know of any apps that actually do this, but it's certainly possible.

After years of searching for the answer to this question, and setting multiple bounties on it, I've finally found a satisfactory answer to this.

Indeed, the design of Android itself makes it near impossible to do.

Therefore, my solution is to run one of the apps (the one that's supposed to have the lower volume) in an Android VM on the same device, using this app.

This may seem like a bit of an extreme solution, but to modern devices with their plentiful RAM and >10-core CPU's it's usually not a big deal. And it's the only way to do it at present.

The fact that the app is running in its very own Android VM means that one can adjust the system volume in that VM without affecting the overall system volume of the host device.

Keep in mind that using the volume buttons on the device will only affect the host device, so you have to go into the settings app of the VM to adjust the volume.

Its great to run Spotify in the VM, because due to Spotify Connect it can be controlled remotely from the host, without having to enter the VM all the time.

Not the answer you're looking for? Browse other questions tagged applications volume-control volume or ask your own question.

5
Is there a way to set app-specific volume?
0
App Audio Mixer for Samsung Dex
1
Does Android support individual sound control per app when two apps with active sound are running?

0
Loud Ringer Volume with Incoming Calls?
3
Volume limit specific app?
5
Is there a way to set a default volume for different bluetooth connections?
0
Different sounds play at different volumes in the same app
4
How to disable warning about listening at high volume for a long time
3
How do I turn off the sound of Zoom on Android? (not the mic)