Apps are automatically closing/restarting and phone is running slow

I am running Nexus 5 with Android 5.0.1 (Lollipop), stock (via OTA Google push). I like it for the most part, except for the fact that I have noticed a repeating problem. After awhile of using the phone (over the course of a couple weeks with no reboots) my phone begins to get noticeably slower. Apps switch much more slowly between each other. Eventually, it gets so bad that, I'll do something like browse from one app, to Chrome, and when I press the back button (to return to the app I just left), the entire app reloads as though it had been shut down behind the scenes. Eventually, foreground apps start closing themselves which, from my understanding, should never happen based on the prioritization of which apps get what memory.

I did take a look at my memory use, and, when the problem is occurring, I have almost 600MB free. (1GB dedicated to system, and 200MB dedicated to various apps.) It doesn't appear that a lack of memory is the problem.

I took a look at my running apps, and I noticed something very interesting. A bunch of the apps listed show as "Restarting..." in their status. They constantly stay like that. That strikes me as very suspicious. Here is a screenshot of what I'm seeing. 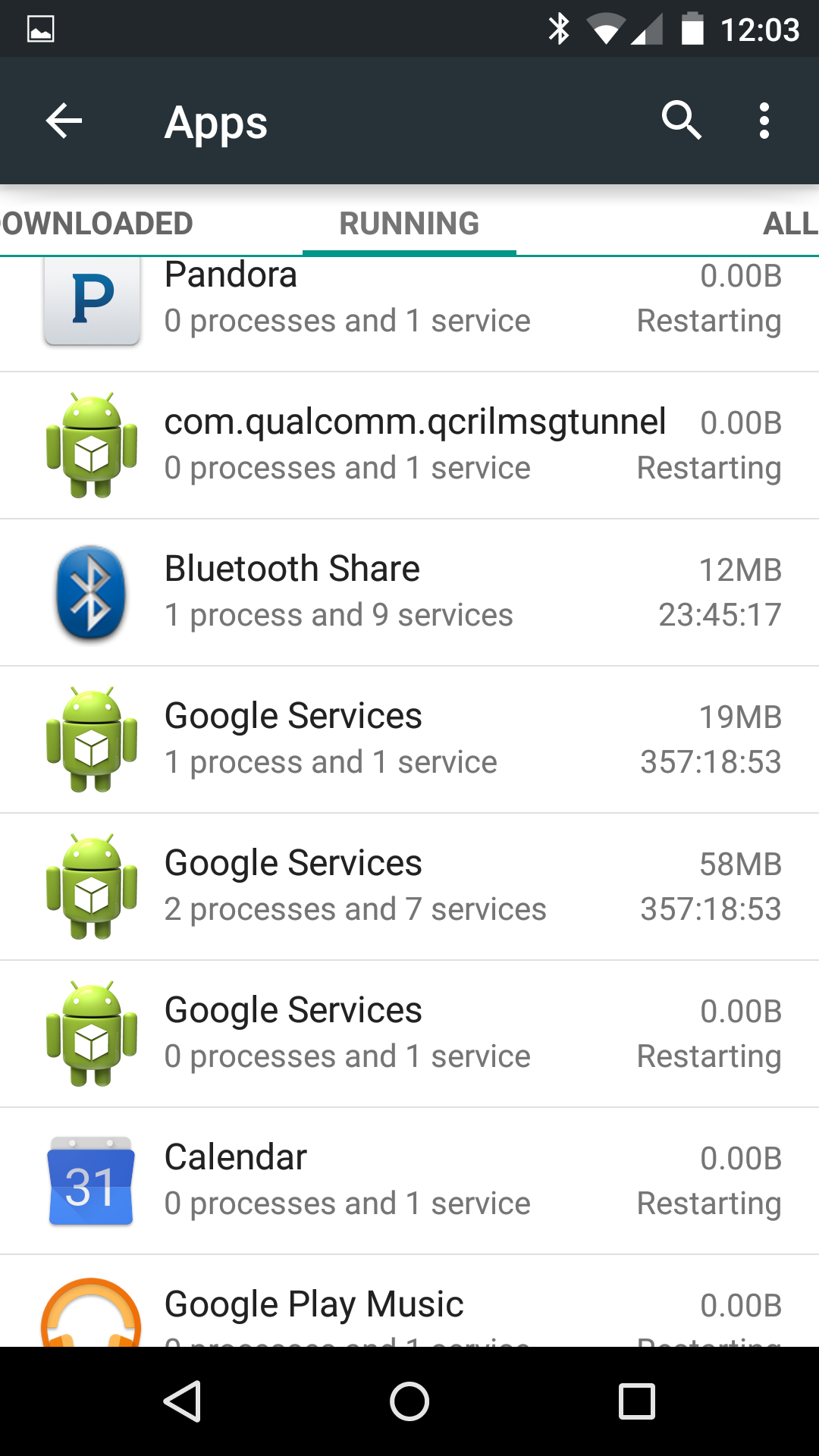 That strikes me as a bit odd, but a Google search didn't turn up anything.

Does anybody have any thoughts, suggestions, etc? Have I run into a bug in Android? This seems to be a pretty "base" thing. I'm not familiar enough with the OS to know for sure, though.

"The problem is that under certain circumstances Android 5.0 and 5.0.1 leak memory, and when the leak has reached a critical point then Android tries to compensate by forcibly closing apps to free up resources. What the out-of-memory killer doesn’t know is that it is Android itself that is leaking the memory and not the apps."

It is an Android lollipop bug. It should be fixed with the next update.

Not the answer you're looking for? Browse other questions tagged applications 5.0-lollipop ram or ask your own question.

9
Keep the home launcher from being killed
0
Why are apps taking up more space?
0
Overheating While Screen Locked
1
Why are apps not loading anything after a while of use (Nexus 5 | 16GB)?
3
Geofence apps not working on Android 7.1.1?