Want to improve this question? Add details and clarify the problem by editing this post.

I recently had to factory reset my MetroPCS ZTE phone. Now when I put the SIM card in from my Huawei it won't connect to the carrier data network, it only works on WiFi.

Here is what mine looks like (I am on t-mobile, which is why I have that selected). Your list may be different.

If this doesn't work, give MetroPCS a call and have them re-add the device to the network on their end. 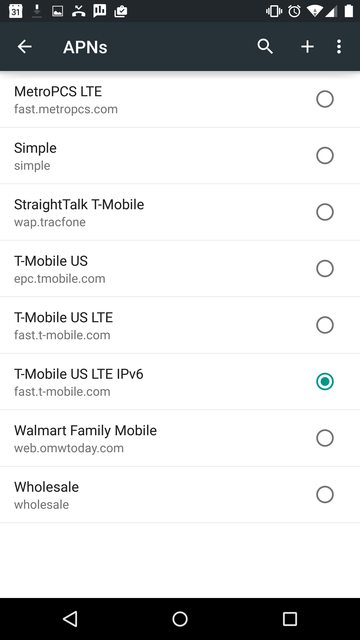 MetroPCS has some kind of marriage between the SIM card and the device. I have been trying to work around this. Else, pay MetroPCS 15$ a pop to change phones.

I have 3 phones I'm working with, 2 unlocked 1 MetroPCS locked. The only SIM card that will work is issued and activated by MetroPCS. Even the unlocked cell, I had to take it in to store and they remarried the SIM. So you can't just swap in an emergency for any reason. Not even BYOD and it's unlocked!

Not the answer you're looking for? Browse other questions tagged mobile-network .