I am trying to install this certificate on a Google Nexus 7 tablet.

I have copied the certificate file (from Win7x64) onto its internal storage and opened it in a file manager to install it. This procedure worked for the previous (now expired) version of the certificate (which I have removed on the device before attempting to install the new one).

However, for this new certificate, the following message appears:

Couldn't install because the certificate file couldn't be read.

The same file could be installed flawlessly into various certificate stores on the computer that I connected the tablet to (hence, the downloaded file is not corrupted). I copied the file several times to the tablet and tried again, always with the same result (hence, the copied file is most probably not corrupted, either).

The tablet had Android 4.4.4 at first, then I upgraded to Android 5.0.2. I am getting the same error message on both systems.

The administrators reponsible for providing the certificate had not received any such reports so far, and the certificate seemed to install flawlessly for other people on Android devices of different types.

I could not find many related issues on the web; googling for the error message quickly led to the localization resource files that specify that message (usually a bad sign with respect to frequency of users out there to encounter an error message). The most promising links still seem to be dead-ends:

Hence, my questions are:

EDIT: Here is the log output of what happens when I try to open the certificate in a file manager app on the device:

The crucial part of which seems to be java.io.FileNotFoundException: /storage/emulated/0/Download/infcacert.crt: open failed: EACCES (Permission denied). I do not understand this message - I have successfully copied and opened other files to the device the very same way as I did now with the certificate file. Moreover, how would I even set these file permissions appropriately when copying them to the device via Windows Explorer?

Just had the same issue.

Go to Settings > Security > Install from storage.
Locate your certificate file and install it.

Edit:
If instead of Install from storage preference you have Install from SD card (this is what being displayed when you use API-19 emulator for example), then one extra step required. Because in this case the activity shows only Recent and Downloads menus without simple way to pick the certificate from the sdcard.
The workaround for me was to put the certificate on my desktop's local web server (mongoose for example). Then (on emulator) I used the stock browser to open the web directory, tapped on certificate (see below) and selected Save link. The file will be downloaded and shown in Downloads view and you will be able to pick it successfully. 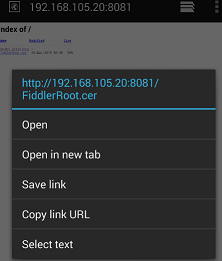 Another caveat: when installing a certificate via Settings > Security > Install from storage on my Nexus 7, Android 5.0.2 I had to navigate to the file via Internal Storage: 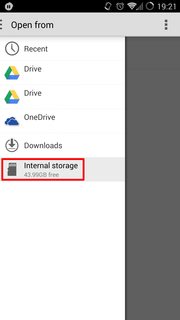 Trying to select the file via the shortcut to Downloads did not work.

Not the answer you're looking for? Browse other questions tagged nexus-7 certificates or ask your own question.

25
Certificate Install without mandatory PIN lockscreen
23
How do I install a user certificate?
18
self-signed certificate install claims success, but android acts as if cert isn't there
0
Unable to accept SSL certificate (k9mail)
2
Can't install a new p12 user certificate
2
How to get Android 11 to trust a user root CA without a private key?